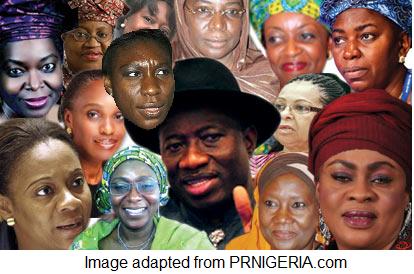 DISCLAIMER: For the internet warriors, before they ask for my head; ‘kill’ does not mean murder and murder does not mean death. Just like ‘drunken’ does not mean pertaining to alcohol and could refer to lackadaisical, inebriated or insatiable.

To ‘kill’ a king, you must find his weakness or his strength.

Well, we have found the weakness of our tyrant king. It stares us in the face: Women.

100 million men cannot kill the king. Taking away all the kings men, cannot kill the king. All the chiefs and kings in Nigeria cannot kill this king. Obasanjo, IBB, Nuhu Ribadu, El-Rufai, Tambuwal, Tinubu, Fashola, Kwankwaso, Amaechi, Lamido, Baraje, Saraki, Atiku, Buhari, Wole Soyinka, … basically every single who-is-who in the nation’s political history. Sometimes I wonder; who is left with the King? It seems the only man of ‘repute’ left on his side is Tukur. The same Tukur that said in May last year that “Boko Haram is fighting for justice; Boko Haram is another name for justice.” Yeah, that Tukur.

So how is Nigeria’s king, who is locally and globally acknowledged to be one of the worst and most dishonest and corrupt leaders in history, from CNN to the World Bank, from Britain to Switzerland, from Otukpo to Bama; being able to resist a coup, resignation and impeachment?

John Lennon, famous writer and a founder of the Beatles, said: “As usual, there is a great woman behind every idiot.” Or perhaps this quote by George Carlin phrases it better: “Here’s all you have to know about men and women: women are crazy, men are stupid. And the main reason women are crazy is that men are stupid.”

Our King knows. He trusts no man. Every last man can leave his side, he won’t bat a lid. He has his power Patiently by his side. He has his other Angels, ready to ‘b!tch’ it for him to the last drop, and he too is ready to stand by them, no matter what thefts, no matter what deaths. He has dried up the economy to make sure no man gets money that can be used against him. Salaries aren’t being paid, Niger Delta militants riot in Russia for no stipend. Even Stephen Keshi, who took Nigeria to victory, is owed.

But what we all realized last week, as a hidden power ‘Angel’ revealed herself among the Angels of ‘Charlie,’ was that, he has ‘your woman.’ We all agree with the contents of her letter, but the timing was clearly political. Beware! This King can make daughters violate the commandments of God.

You better be careful if you want to deliver a ‘death-blow’ to this King, because he has the Pin of power women; you might want to look closely at the political woman by your side and the ones in your family, because this ‘party man,’ is a real man of the party, booze and babes. He is a woman’s man true and through. He knows their price; how to buy their loyalty. He knows how to keep them at bay, ready to turn them out against you, as and at whenever needed.

So if you honestly wish to ‘kill’ this King, you better work on his powered and power-able Angels. You might also wish to find a Queen and let her loose against him. That will crush him. A cat fight!

It lactates, the ‘Oracle’ said. “The one who guards the King and the one who will give the King his parrot’s eggs (which traditionally was done when chief’s told a King he was impeached and should kill himself) is the one who holds the baby for nine months.”

SECOND DISCLAIMER: This article is mere satire. This is not a chauvinist article. This article refers only to a handful of cabal women and does not in any way suggest or attempt to suggest that women in general are more manipulate-able, purchase-able of influence-able toward participating in and supporting corruption, tyranny, divisionism and destruction of nations.

Secret delivered, I will like to formally welcome Obasanjo to our fold as ‘APC,’ that’s ‘APC’ the Opposition (not necessarily registered in the party), as anyone of us who opposes this insane administration is labeled by the less than 3000 remaining ‘paid’ supporters of the King.

May the families, friends and colleagues of those killed and maimed by Boko Haram terrorists, due to our under-equipped and underfunded army in Bama, have the fortitude to bear the losses and the patience to prevail till a new administration that values our military and civilian lives over the lining of their pockets, replaces this one.