Senator Ahmed Zanna, who represented Borno Central who died Mid May in Abuja at age 59 was fingered on several occasions as a Boko Haram sponsor.

Below are some of the instances where the Senator was connected to Boko Haram:

Some months ago, a wanted Boko Haram commander, Shuaibu Mohammed Bama was  arrested at the private residence of Senator  Zanna; then said to be his nephew or so.

Bama was arrested when the Joint Task Force JTF stormed the house of the serving Senator  who had allegedly been under  watch by security forces  for allegedly romancing and sponsoring the Boko Haram sect.

Zanna was once indicted by the former Police Commissioner in Borno State Simeion Midenda who reportedly found some Boko Haram related materials in the hands of Zannah’s Supporters.

Senator Zanna’s “Hajj-by-road” activities had been accused by former governor also linked with the sect, Ali Modu Sheriff, as being used in the importation of arms and window for the training of terrorists. This accusationw as contained in a press statement in which the former governor accused the PDP party (which he later went to join) of being the party behind Boko Haram in the state. 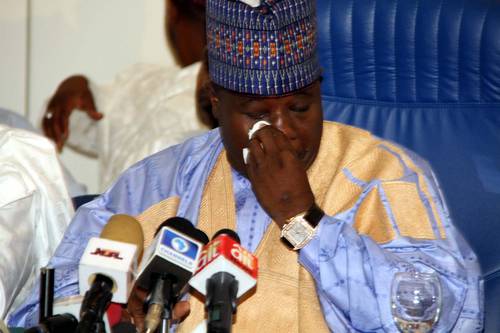 While it is not clear if he had ever reported this information to the security agencies, the former governor said that some of the so-called “pilgrims by road” have been traced to terrorists’ camps in Afghanistan and Syria, and not Saudi Arabia, their preferred destination.

“It is very much on record that 27 of such pilgrims are still missing uptill date.”

He refuted the senator’s claims that he had parted ways with his nephew, Shuaibu Bama, saying he can “authoritatively confirm” the man was still his associate up to the time of his arrest.

He further queried why Senator Zanna never spoken against the atrocities being committed by Boko Haram, noting that instead, he has been calling for the declaration of state of emergency or the disbandment of the JTF.

The former governor also declared the People’s Democratic Party in Borno State as “the engine room behind Boko Haram,” arguing that Zanna being the second senator fingered as having links with Boko Haram confirms “the wildly believed theory.”

He wondered how the Senator who he accused of not having visited Borno or his constituency even once since his inauguration can afford to play politics with the serious issue at stake by sponsoring terrorism against his own people. Read full

The senator representing Borno central in the upper chamber of the NASS told his interrogators that he gave N1.5 million for Sallah rams to the sect members following their threat to attack him.

He explained that the sect members forcefully took his aide to his house for a search, where they retrieved N250,000 with a message that he should provide them with a sum of N10 million or else they would come for him.

The senator, who was released last night, is expected back at the DSS headquarters Tuesday, in continuation of investigations. Read full

After being suspected and interrogated in connection with Boko Haram, the Senator repented in public eye and took a prominent role in advocating resolution to Boko Haram crises while regularly revealing that he still had intelligence on the actions of the terrorists.