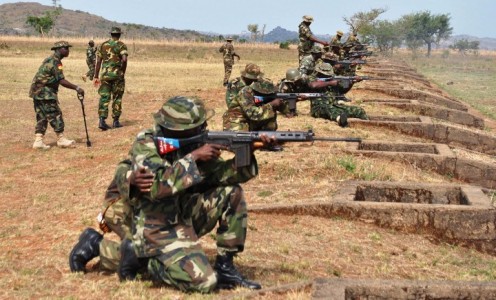 The Army said it killed the suspected terrorists in a gun battle.

The 7 Division of the Nigerian Army said it successfully repelled an attack by suspected Boko Haram terrorists in some villages in Damboa and Nganzai Local Government Areas of Borno.

This is contained in a statement signed by the Spokesman of the Division, Lt.-Col. Sagir Musa, in Maiduguri on Saturday.

“Our troops have successfully repelled an attack by Boko Haram terrorists in Bulabulin Ngabura village and Gajiram town in Damboa LGA.

“They had also repelled attacks in Nganzai Local Government Area by the terrorists last week.’’

He said that the army was alerted, following the invasion of the villages by the terrorists.

“Our troops supported by a combat helicopter, trailed the terrorists to their camps and destroyed their hide-outs.

“About 50 terrorists lost their lives in the ensuring gun battle.

“Suspected terrorists had stormed Gajiram and Ngabura communities in Nganzai LGA and Bulabulin Ngabura in Damboa LGA, killing about 15 persons last week before they were dislodged by the military,” Mr. Musa said.

The Nigerian military has been involved in efforts to maintain peace and dislodge the outlawed Boko Haram from the north, particularly from Borno, Adamawa, and Yobe.