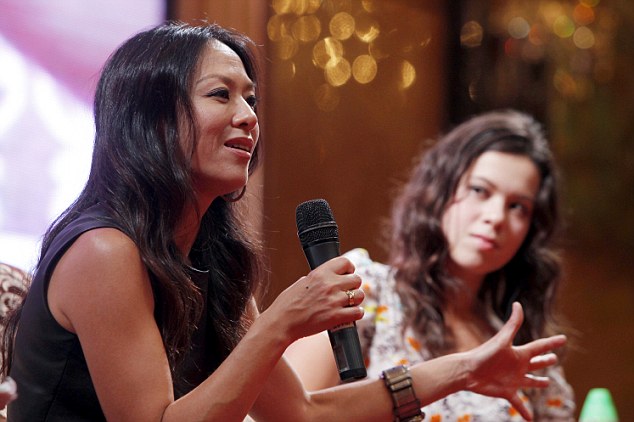 The Triple Package? The Eight Races and Relgious Groupings Amy Chua Names As Better Than Everyone Else and Why?

Jewish – Jewish Americans have the highest incomes per head across the nation
Indian – Along with Indian Americans
Chinese – Chua infamous first book Battle Hymn of the Tiger Mom explored the relationship between Chinese parents and their children’s success
Iranian –  Iranian-Americans have historically excelled in business, academia, the sciences, arts and entertainment
Lebanese-Americans – Such as Ralph Nader have had a significant participation in American politics and social and political activism
Nigerians – Ivy League admission rates of West African immigrant groups far exceed those of non-immigrant American blacks
Cuban exiles – Eva Mendes and Gloria Estefan are prominent Cuban exiles
Mormons – Mormons such as Mitt Romney are high profile politicians

She gained notoriety in 2011 as the uncompromising ‘Tiger Mom’ – boastful that Chinese mothers make better parents and ultimately have more successful children.

Now though, Amy Chua, 51, has inspired the fury of the public on Twitter with her new controversial theory that some races and religions are just superior to everyone else.

Dubbed ‘simply racist’ by one commentor on Twitter, another pulled no punches and called her a ‘full blown eugenics pushing racist!’

Others were more diplomatic charging that ‘Chua has now begun treading territory uncomfortably close to racism.’

Published in the new book, ‘The Triple Package’, that she has written with her Jewish husband Jed Rubenfeld, Chua names the eight groupings that are exceptional in no particular order – and unsurprisingly, the Chinese are one of the top dogs.

The other seven are Jewish, Indian, Iranian, Lebanese-Americans, Nigerians, Cuban exiles and Mormons.

Clearly one of these groupings is a religion and by calling them ‘cultural’, never ethnic, racial or religious, Chua and her husband seek to avoid the hugely controversial criticism this would bring.

However, Chua does identify three distinguishing features these eight peoples have that guarantees them success over others; superiority, insecurity and impulse control.

‘That certain groups do much better in America than others — as measured by income, occupational status, test scores and so on — is difficult to talk about,’ the authors write. In ‘The Triple Package,’ Chua and her husband, co-author Jed Rubenfeld (right) – lay out their manifesto for how America is going to succeed in competition with other nations Family: Chinese American author Amy Chua in Shanghai with her family, 18-year-old Sophia, 14-year-old Louisa, her husband Jed Rubenfeld and her parents, to promote her book, Battle Hymn of the Tiger Mother in 2011

‘In large part, this is because the topic feels so racially charged.’

Chua and her husband argue that far from pointing fingers and exulting certain cultural groups, they are agitating for everyone else to follow their example and bring back America’s glory days. Chua, who is a law professor at Yale launched to international fame in 2011 when The Wall Street Journal published an extract from her book, ‘Battle Hymn of the Tiger Mom’.

Raised in the Midwest, Chua’s book showed her determination to take the perceived worst stereotypical traits of Chinese women as cold and hostile to their children and make virtues out them.

She wrote that she called one of her two daughters ‘garbage’ for being rude and labeled a homemade birthday card as awful, telling her girl, ‘I don’t want this – I want another one.’

She also refused to let her children watch television, go to sleepovers and even threatened to give-away one of her girl’s beloved dollhouses if she couldn’t learn to play a classical composition within days.

Her book bolstered her opinion that Chinese mother’s made the best parents and played on the American fear of the United States being eclipsed by a rising China.

The book was a best seller and now her new exploration of family seeks to play on the growing fear of the middle-class never booming again.

She breaks down the ‘Triple Package’ succinctly for her readers as follows:

1) A superiority complex: Chua believes that any cultural group who innately thinks they are just better than others has an advantage.

Ignoring the wars, genocide and abject human misery this kind of thinking has caused, Chua and her husband declare that ‘the superiority complex is antithetical to mainstream liberal thinking…the stuff of racism , colonialism, imperialism, Nazism.’

2) Insecurity: Chua and her husband believe that a deep seated insecurity can be a motivating drive to achieving success.

‘That insecurity should be a critical lever of success is another anathema, flouting the entire orthodoxy of contemporary popular and therapeutic psychology,’ they write according to the New York Post.

‘Note that there’s a deep tension between insecurity and a superiority complex,’ the authors continue.

‘It’s odd to think of people being simultaneously insecure but also convinced of their divine election or superiority.’

3) Impulse Control: Chua thinks that perseverance and patience are virtues that have been lost to most Americans – but still exist among her eight golden cultural groups. U.S. author Amy L. Chua, known as the Tiger Mom, speaks at a promotional event for her book, Battle Hymn of the Tiger Mother, in Shanghai, China, 22 June 2011

‘Impulse control refers to the ability to resist temptation, especially the temptation to give up in the face of hardship or quit instead of persevering at a difficult task.’

Those who fail at this are everyone not in the magic eight.

‘Because all three elements of the Triple Package run so counter to modern American culture, it makes sense that America’s successful groups are all outsiders in one way or another,’ they write.

‘Paradoxically, in modern America, a group has an edge if it doesn’t buy into — or hasn’t yet bought into — mainstream, post-1960s, liberal American principles.’

Straying into controversial territory, Chua and her husband say that African-Americans don’t make the list because the Civil Rights Movement destroyed their chance of any superiority.

‘In this paradoxical sense, equality isn’t fair to African-Americans,’ they write.

‘Superiority is the one narrative that America has relentlessly denied or ground out of its black population.’

African immigrants do better than African Americans because they were born on the continent and therefore just as the Chinese believe their 5,000-year-old civilization makes them great – so do Nigerians.

Trying to bundle their ‘Triple Package’ for everyone though is a hard task.

After spending much of the book criticizing most Americans, Chua and he husband declare that there the point of their book ‘is the promise of a day when there are no longer any successful groups in the United States – only successful individuals.’