NewsRescue- You first heard it like a rumor, thought it wasn’t true, hoped it wasn’t true. But now it has been confirmed, not once, twice but several times.

Nigerians are actively seeking markets to sell their kidneys online and have been making journeys to countries in Asia, – Malaysia and India particularly, to sell usually just one of their two kidneys.

The spoil: N5-10 Million, which translates to about $30-60,000 for the vital blood filtering and red blood cell (RBC) generating organ.

There is a sophisticated online network of vendors, agents, resellers and hunters, who actively seek candidates, sometimes going to the extent of kidnapping them and supply these usually desperate, hopeful-for-a-quick-fix to life’s financial dreams, young Nigerians, to ready slice-and-pop physicians in shed facilities.

These ‘experts’ excavate the organs and ice-box them to the eager transplant centers, thriving with Asians, Middle Easterner’s and Europeans on the waiting list, hoping for that fresh, cheap paupers kidney.

How much do clients pay the harvesting centers for these kidneys? About $100-200,000. And they are teaming on the waiting list. Sometimes kidneys are harvested with meager remuneration given the ‘donor’, or rather, seller- paid as little as $5,000 for the vital organ, and many others die at operation or soon after.

As you read this article, there are possibly 1000 Nigerians reading it with you, hoping to find a link to the underground network where they can get the hook-up to sell their organs.

A popular website, KidneyKidney.com has been an attractive bait site for Nigerian and other national hope-fulls. 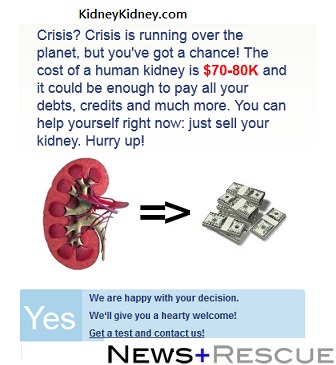 In our snip image below, you will notice members advertise their ‘high glomerular filteration rate(GFR)’ kidneys and wait eagerly for some contact with a prospective buyer who will arrange their flight to Malaysia, get the quick operation done and they can soon return to Nigeria and start building and buying. 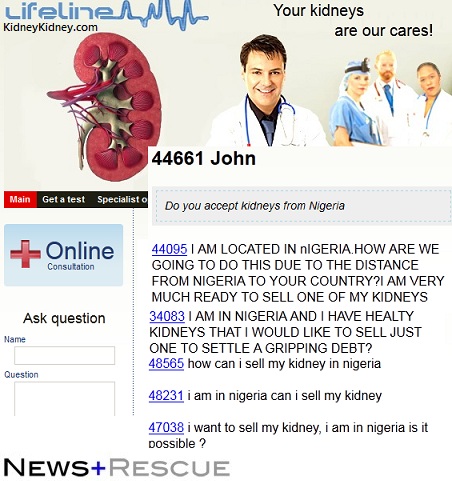 The site claims to be a joke, and if thoroughly searched, you come up with the ‘about’, page which states:

This site is a joke!

You’ve been played a trick.

This site is a kind of black humour. We don’t provide any services related to organ transplantation.

We just want to draw attention to the problem of the illegal organ withdrawing. We hope that the future medicine will be able to cultivate in laboratory environment any organ for every patient who needs transplantation.

But the site actually allows users fill out extensive donor questionnaire forms, it also trumps the benefits of donating organs generously, and very importantly, the site lacks obvious contact information or Non governmental organizational information, which makes it highly suspect as an information retrieval site which then sends and sells the completed application forms to its known harvesters.

We urge an investigation into the operation of this site. In fact, as it can be concluded that the site gathers potential donor information, we advise this site should be taken offline as even if the managers claim honesty, the site is not secure, has no secure protocol and can be hacked to retrieve the sensitive information.

The Nigerian press has some very troubling stories on past episodes of transplant, with a serious clarion call:

Section 17 subsection 3 ( f ) of the Nigerian constitution as amended states that ‘children; young persons and the aged are protected… against moral and material neglect’. With the rate at which Nigerian youths are selling

their kidney in Malaysia, India, China and other Asian countries for 10 million naira, without doubt the Nigerian government has failed in the above duty as listed in the constitution. Yahoo-Yahoo boys are said to be the ones mostly involved in this trade, probably after realising that cyber-fraud is not as lucrative as it used to be (whites are certainly wiser now). In a bid to keep up with their upward way of life, they have discovered a new way of making money which of course you could say is legit. Given the high incidences of chronic kidney diseases in some Asian countries, the trade is certainly a money-spinner. In Malaysia alone, there are about 2,500 cases of kidney failure yearly while in China about 1.5 million people are reportedly in need of organ transplants, but that only 10,000 were performed yearly, thus fueling an illegal trade in organs. As legit as some may claim this newly fancied trade by Nigerian youths is, there are attendant risks. There is no better pointer to this than the tales of some of those who have traded their kidney.

As reported by a website ‘www.specialsinternational.com’, there was a certain undergraduate named Segun who sold his kidney in Malaysia. On collecting his 10 million naira, he reportedly did not wait for the post treatment, only to come back to Nigeria drinking and clubbing. He was said to have died in a car he bought from the proceeds of his kidney sale. 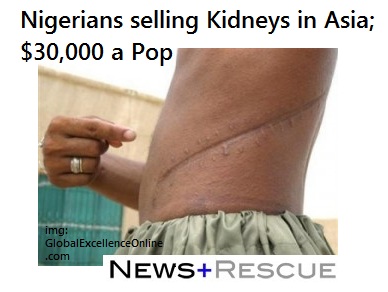 Another Nigerian, 31-year-old Eghosa, reportedly narrated that he met the man who bought his kidney through a South-African. He said he was taken to a place which looked like an improvised clinic where the kidney was removed. Ever since, according to the website, Eghosa has been falling sick regularly. In his own case, it was either he sold his kidney or let his two sisters go into prostitution. He had to make ends meet for them.

I know there are some who may discountenance these stories, but I have heard on good authority that most Nigerian youths who travel to Malaysia do so in a bid to make money from selling one of their kidneys. The trade is becoming so popular that even in Ekiti some hitherto yahoo-yahoo boys have embarked on this trip and returned to probably flaunt their proceeds from their sale. read more

Several Doctors in India have been arrested in Kidney sale scandals. According to Times of India:

“HOWRAH: Sheikh Rabial, the kingpin in the kidney racket from Howrah, stepped into the flourishing organ trade by selling

his own kidney. It was about a year-and-a-half back that the 32-year-old sold his own kidney to make quick money. The potter then came in touch with those in the trade’ and built his own network within months. These were some of the startling revelations made by the accused during police interrogation. Rabial was apprehended by police on Thursday.”

The article went further to describe the incentives advanced:

“Rabial has lured many in his locality by promising a “job” that was extremely lucrative. He even advanced sums of `15,000-` 25,000 to the unsuspecting victims.”

It’s a multimillion dollar racket, spanning several continents, and though the India Central Bureau of Investigation (CBI) has made a handful of arrests, the lucrativeness of the business and top caliber of global clients in need for kidneys, keeps the dirty business thriving.

An Organ is sold an hour- WHO

The World Health Organization clearly condemns all forms of illegal organ trade and has detailed that over 10,000 blackmarket operations take place every year, this report was released May 2012.

Kidney trade amounts to 75% of all illegal organ trades, according to the report. The UK Guardian details:

The Guardian contacted an organ broker in China who advertised his services under the slogan, “Donate a kidney, buy the new iPad!” He offered £2,500 for a kidney and said the operation could be performed within 10 days.