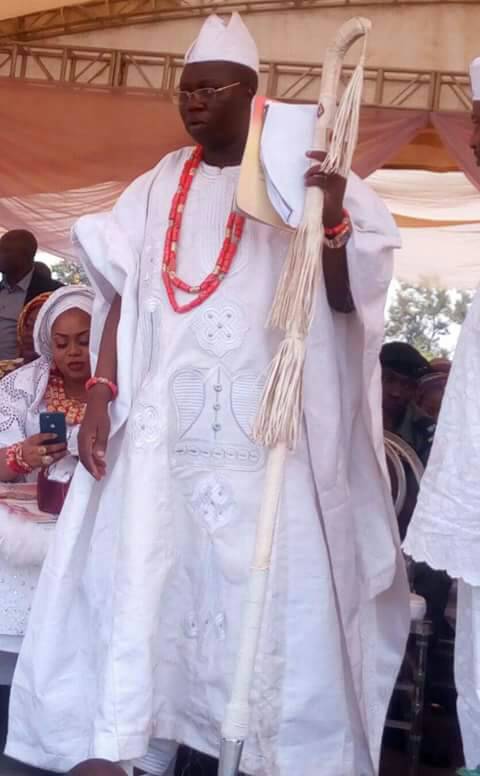 A coalition of civil society organisations, the Centre for Human Rights and Social Justice (CHRSJ) has urged relevant stakeholders to always ensure that they take part in mass based activism in the interest of the citizens of the country.

This is coming  just as the Executive Chairman of the coalition, Comrade Adeniyi A. Sulaiman in a chat with newsmen in the organisation’s office in Ikeja, Lagos lauded the installation of the Chief Gani Adams as the 15th Aare Ona Kakanfo of Yorubaland, saying the move is a fitting reward for Adams consistency in the defence of the Yoruba nation over the years.

Commenting on the outcome of the recently held 14th annual Fawehinmism lecture/symposium in honour of the late right activist, Chief Ganiyu Oyesola Fawehinmi (SAN), (SAM) in Lagos, Sulaiman regretted that some critical stakeholders have abandoned the struggle to pursue pecuniary gains.

Apart from members of the civil rights community, Sulaiman listed stakeholders who should promote the rights of the common man to include, members of the judiciary, the Nigeria Bar Association (NBA), saying they should stand up to be counted in the preservation of the legacies of the late legal icon who lived his life for the defence and protection of the rights of the common man.

On the state of right activism in the country, Sulaiman said, that “It is regrettable to note that the flame of activism in the country is almost being extinguished in the country. The civil rights activism is not as potent as it used to be. What we have today is nothing more that bread and butter activism with everybody looking after himself alone and not the common good of all. This we have to change in our efforts at trying to immortalize the late Gani Fawehinmi.

“This was not the type of activism left for us by the late Chief Fawehinmi while alive. The late legal icon was steadfast and principled in his fight and he never wavered in his convictions unlike the kind of activists that we have today who have not acted very well to safeguard the current democratic order.”

In setting agenda for the judiciary, Sulaiman urged members of the bench to always ensure that the courts are turned to the “chambers of justice and not the chambers of law as we have today,” adding that the country will witness marked improvements in the quality of life of the average citizens when the courts turn out to be the last hope of the common man.

“I am also using this medium to appeal to our brothers and sisters in the legal profession to always ensure that they join in the advocacy for good governance through their participation in all activities that serve to promote the rights and interest of the common man.

“They must also side with the people by ensuring that they only collect briefs from reputable clients and not the ones whose antecedence and their means of livelihood are questionable.” He said.
Sulaiman concluded that if all the stakeholders undertake to hold governments at all tiers responsible for their actions and in some cases their inactions the way the late Gani Fawehinmi carried on, “I am sure the country would not have found itself in this mess that it has found itself now.”

On the installation of Adams as the new Aare Ona Kakanfo (generalissimo) of Yorubaland, Sulaiman on behalf of the coalition stated that the appointment and installation is a fitting reward for his (the new chief’s) consistent efforts at defending the rights of the downtrodden masses not only in Yorubaland.
To Sulaiman, Adams, being a product of the Fawehinmi school of thought has been able to keep the flag of civil activism flying in the country not minding the risk and the cost to his personal safety.

“We are elated that Adams has been installed as the Aare Ona Kakanfo of Yorubaland. To us, it is well deserved and a fitting rewards for the years of dedicated advocacy for the emancipation of the common man and the downtrodden not in Yorubaland but also across the country. We are not surprised that Adams has turned out this way, no! not at all being a seasoned student of the Fawehinmi school of thought.

“For those who may not know, Adams courage prompted the late Fawehinmi to openly acknowledge him as the undisputable leader of the Oodua Peoples Congress (OPC) when the late legal icon was the national chairman of the Joint Action Committee of Nigeria (JACON). Since then, he has not looked back in his fight to enthrone good governance using culture and good governance as a tool.” Sulaiman stated.

The coalition also warned the new Aare not to keep his eyes away from the activities of members of the OPC with a view to preventing them from engaging in activities that could be inimical to the peace and security of the South West as well as some states of the North central. 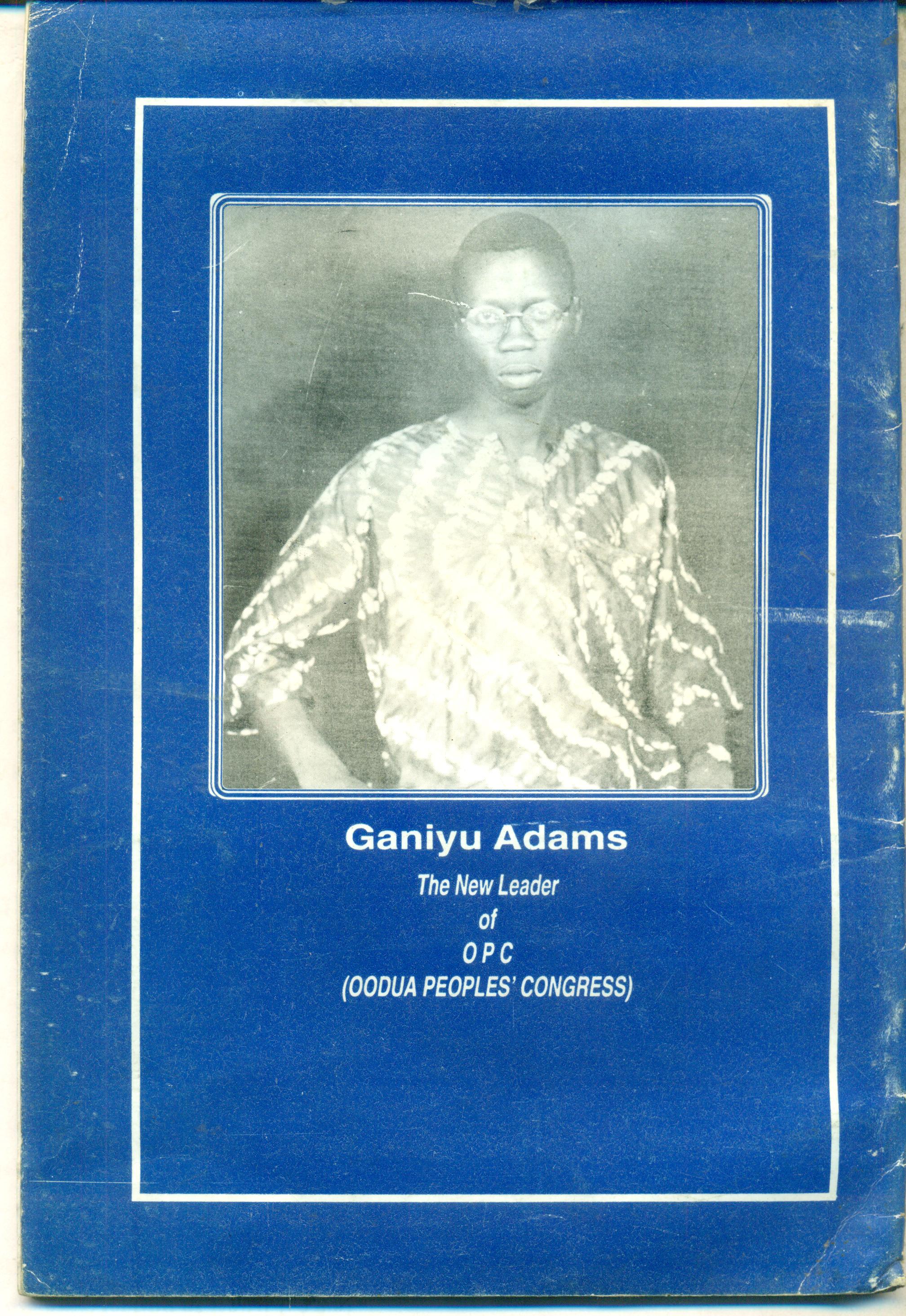 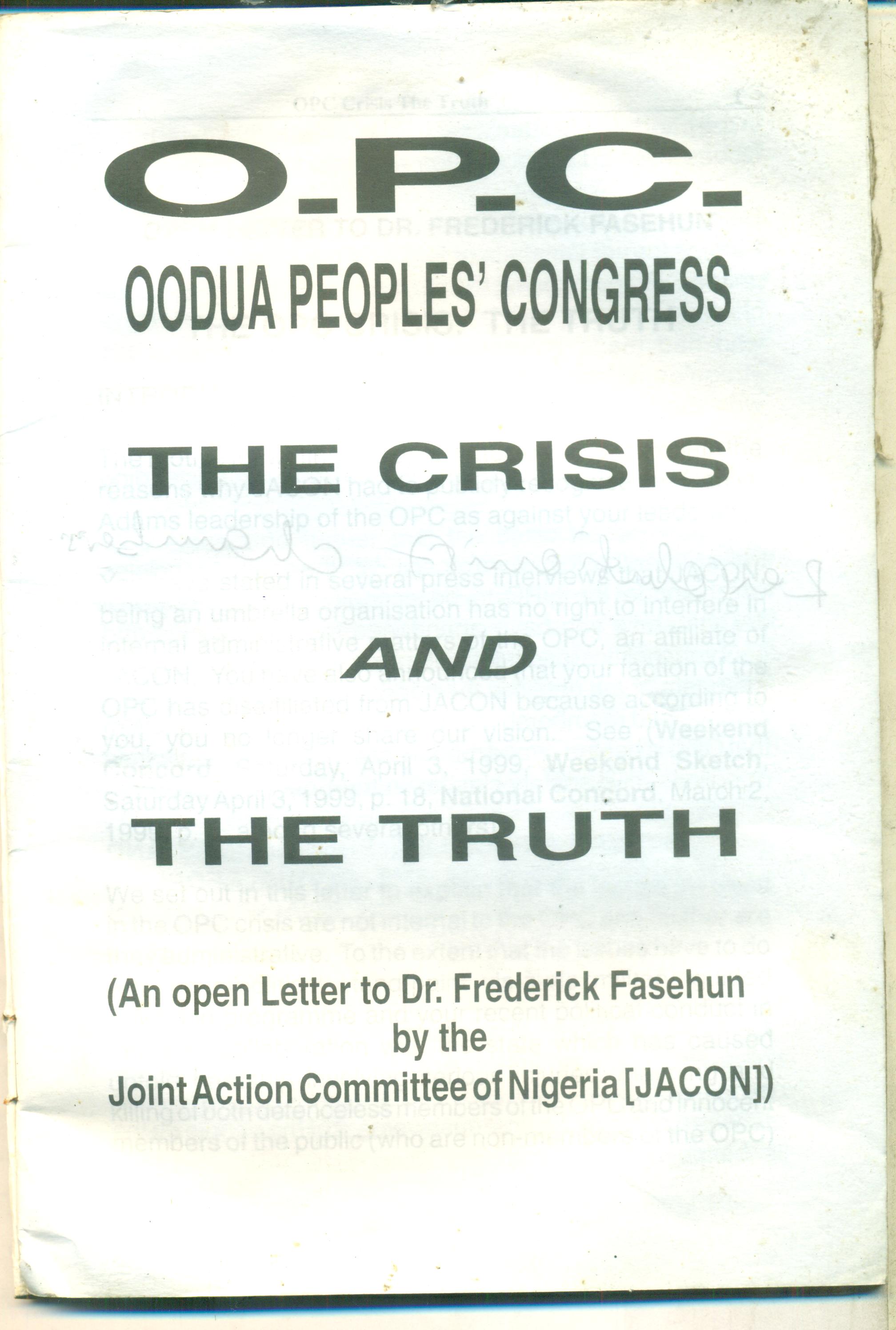 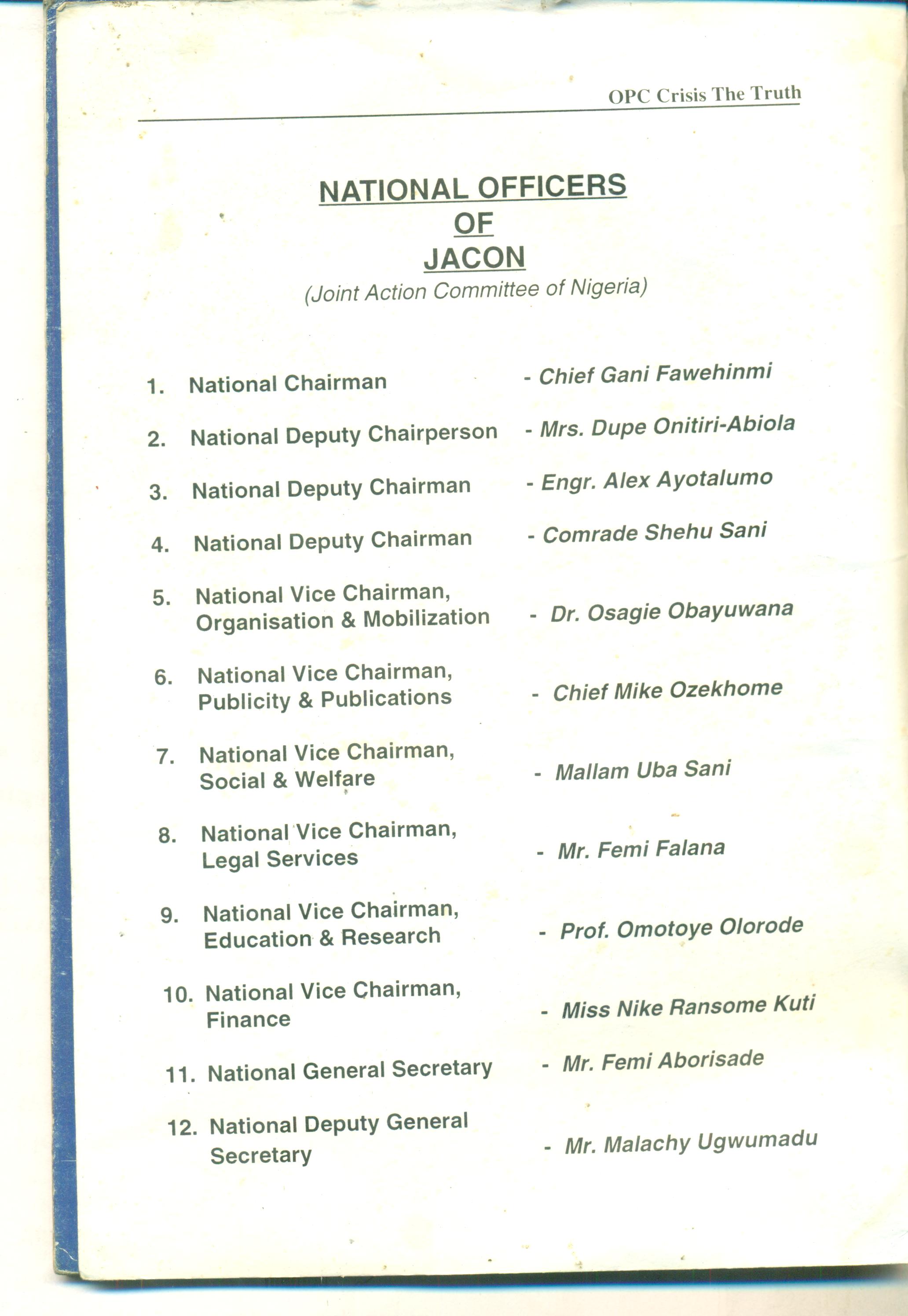 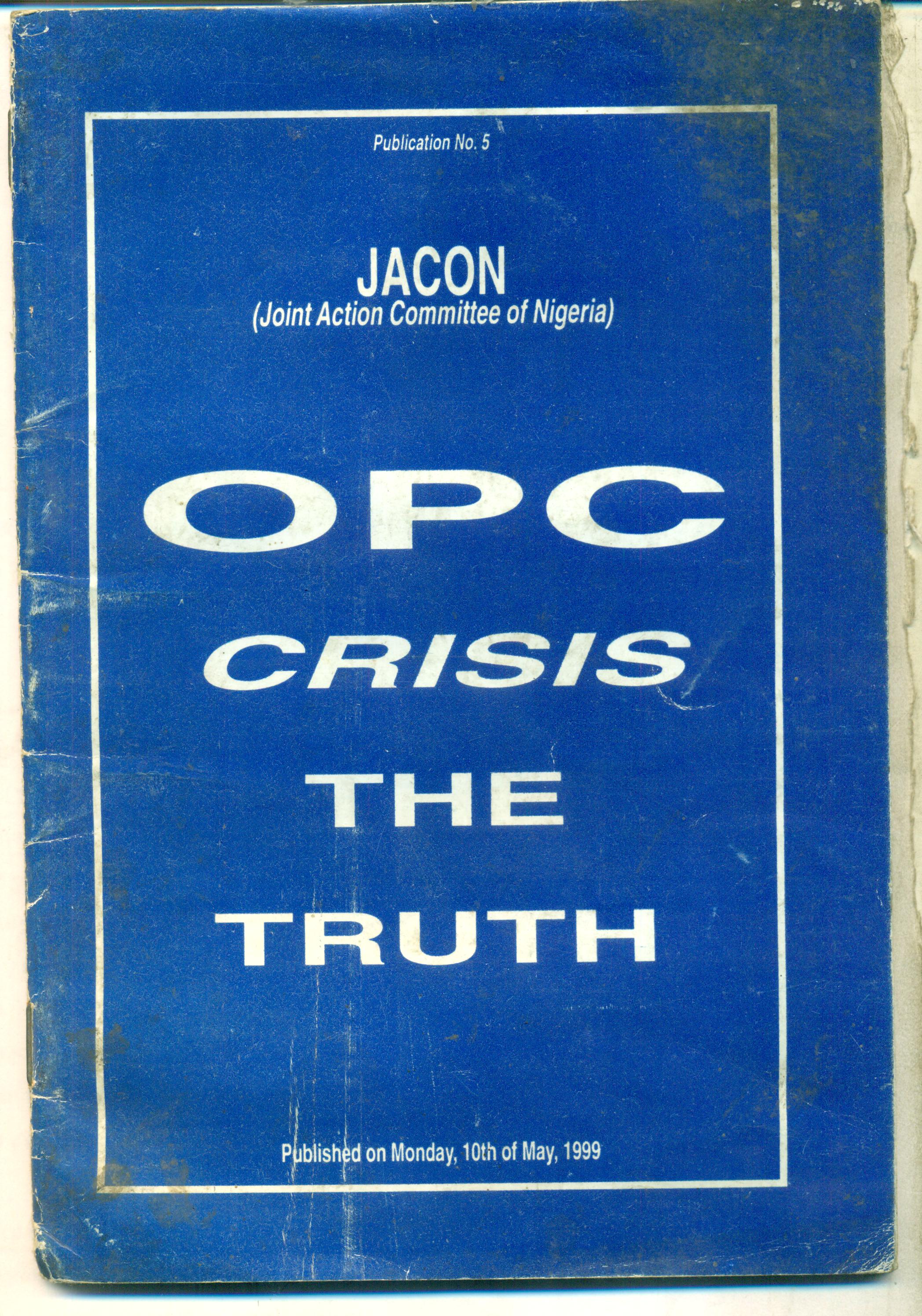