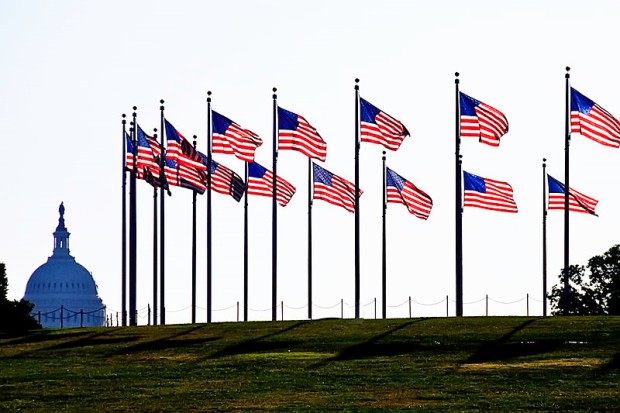 Washington (CNN) — The U.S. government shut down at 12:01 a.m. ET Tuesday after lawmakers in the House and the Senate could not agree on a spending bill to fund the government.

The two sides bickered and blamed each other for more than a week over Obamacare, the president’s signature health care law. House Republicans insisted the spending bill include anti-Obamacare amendments. Senate Democrats were just as insistent that it didn’t.

Federal employees who are considered essential will continue working. But employees deemed non-essential — close to 800,000 — will be furloughed.

Most furloughed federal workers are supposed to be out of their offices within four hours of the start of business Tuesday.

But a shut down does not actually shutdown the government:

It turns out that the ominous “government shut down” isn’t so apocalyptic after all since it won’t actually shut down government because the vast majority of federal services and activity will continue as normal.

In addition, the same thing has happened – without dire consequences – no less than 17 times over the past three decades.

The dispute over Obamacare means it is “99.9%” certain that the US government will “shut down” on October 1st because lawmakers have failed to pass legislation that will authorize the government to spend money to fund its operations from the beginning of the new fiscal year.

However, as the Washington Post highlights, the same “shut down” has occurred 17 times since 1977. Most of the previous shut downs lasted from a few hours to a few days. The longest ran for 21 days from December ’96 to January ’97 during the presidency of Bill Clinton.

Obama supporters and Democrats have attempted to portray a potential government shut down as something approaching a doomsday scenario, most notably Democratic Senator Tom Harkin, who hyped the prospect of it “as dangerous as the breakup of the Union before the Civil War.”

In reality, key functions of the government will continue to operate as before even in the event of a “shut down”.

– The TSA will still be screening passengers in US airports;

– The US military will stay on duty and many credit unions and banks will cover their Oct. 15 paychecks if they are delayed;

– Embassies and consulates overseas will continue to provide services to American citizens;

– The mail will continue to be delivered;

– Federal courts will continue to operate;

– The US Supreme Court will continue to operate as normal when it resumes on October 7;

– Taxes will continue to be collected;

– Sales taxes will continue to be collected

– Garbage will continue to be collected;

– Visa services for people traveling to the United States will continue to operate;

– US passport applications will continue to be processed normally;

– Green card applications will continue to be processed normally;

– Social Security and Medicare benefits will continue to operate normally;

– The vast majority of Homeland Security employees will stay on the job;

– The vast majority of Coast Guard employees will stay on the job;

– The vast majority of Border Patrol agents will stay on the job;

– The vast majority of Secret Service personnel and other law enforcement agents and officers will stay on the job;

– The National Weather Service and the National Hurricane Center will continue to issue natural disaster warnings and track storms;

– The District of Columbia passed a $144m contingency fund on Friday to ensure all its services would continue to operate normally;

– Most services managed by the Department of Veterans Affairs will continue.

The most damaging consequence of a government shut down will be that non-essential federal employees will be furloughed (given temporary unpaid leave) and see their paychecks delayed. That’s a bummer if you work for the government, but it’s hardly a doomsday scenario.

In addition, previous “government shut downs” have not caused any kind of sustained panic in the financial markets.

As Ron Paul writes today, “Despite all the hand-wringing heard in DC, a short-term government shut down (which doesn’t actually shut down the government) will not cause the country to collapse.”