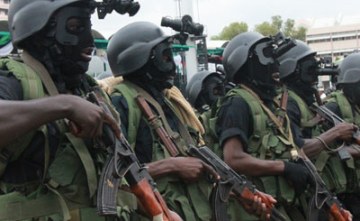 AllAfrica- The Chairman of the Northern States Governors’ Forum (NSGF) and Governor of Niger State, Dr. Mu’azu Babangida Aliyu, Sunday reacted to the quit notice issued to residents of Mahanga, Kakuruk, Maseh and Shong II in Barkin Ladi and Riyom Local Government Areas of Plateau State by the Special Military Task Force (STF), urging them to exercise caution in carrying out their duties.

The STF had on Saturday asked inhabitants of the affected areas to vacate within 48 hours along with their property, in readiness for operations to flush out insurgents that have been attacking residents of the communities.

But Governor Aliyu warned that the 48-hour ultimatum issued by the STF could lead to a breakdown of law and order, not only in Plateau State but in other parts of the country.

A statement by Aliyu’s spokesman, Danladi Ndayebo, said the forum was worried by complaints from a section of the region to the effect that the vacation order represented a declaration of war by the military against a segment of the nation’s citizens.

The statement said although the forum was not opposed to any action that would put a stop to the senseless killing of innocent people in Plateau State, it warned that the region could not afford the likely negative consequences of the order that the people should vacate the said villages without providing alternatives.

The forum advised the STF to work more closely with Governor Jonah Jang of Plateau State instead of issuing unilateral orders that could further worsen the already bad security situation in the state.

Aliyu said the current security challenges in Plateau State provided the opportunity for all stakeholders to sit down and solve the indigene-settler problem once and for all.

Also, the Council of Ulama, a Muslim leaders group in Plateau State has asked all Muslims in the state to stay at home today and ignore the relocation order issued by STF to residents of troubled areas in Barkin Ladi and Riyom Local Government Areas.

In a statement signed by Mr. Sani Mudi on behalf of the council, the Ulama said the directive was in solidarity with Fulani residents in the areas.

The statement said: “The leadership of the Muslim community in Plateau State has directed all Muslims to stay at home tomorrow (today), 16/07/12, and observe a day of prayer in solidarity with the Fulani community in Riyom and Barakin Ladi Local Government Areas who have been served a 48-hour quit notice by the STF. All muslims engaged in any activity are requested to comply.”

Related: NewsRescue- The Nomads Are No Longer Welcome: Nigeria’s New Agro-Economic Crises In Face Of Famine

The Defence Headquarters had ordered inhabitants of over five villages in Plateau State, comprising Mahanga, Kakuruk, Kuzen, Maseh and Shong II, suspected to be used as a major hideout by terrorist groups perpetrating havoc in the state to temporarily relocate so as to avoid collateral damage in a planned offensive in these areas.

The directive came against the backdrop of the recent massacre of over 150 people in the two local government areas by suspected terrorists using military uniforms and camouflage.

According to the statement by the Director of Defence Information (DDI), Col. Mohammed Yerima on behalf of the Chief of Defence Staff, the directive is necessary for successful operations in the planned onslaught by the STF in Jos to root out the terrorist groups in the state.

Yerima assured the people of their safety and that temporary shelters have been provided for their stay till the end of the military operations.

He said: “Having failed in their attempts to continue to instigate communal strife in Plateau State, criminal elements who are enemies of the people decided to wear military type uniforms and attack directly innocent citizens of some parts of the state.

“This direct attack was obviously decided upon when these criminals realised that their previous tactics of inciting one section of the populace against another is no longer working because the people of Plateau State have seen through the divisive technique of these ungodly people.

“The Special Task Force in Jos has found out that some of the criminals who carried out last week’s attack on innocent people are still hiding around some villages in order to continue to perpetrate crimes against the good people of Plateau State. The Task Force is determined to rid the state of these murderers.

“The Defence Headquarters wishes to inform the villages where these criminal elements use as hideouts to vacate to a safer place where arrangements have been made for them by the state government to avoid collateral damage.

“This temporary relocation is for a while and the villagers will relocate when the operation is completed. The villages affected are: Mahanga, Kakuruk, Kuzen, Maseh and Shong 2.”

The Defence spokesperson also urged the residents of Kura-falls, Kuzuk and Sharuk, Rim of Gashish and Bachit Districts not to panic and to be careful of their movement within the area and avoid places of military operations until further notice.

In a related development, the Berom community resident in Abuja yesterday urged President Goodluck Jonathan to evacuate Fulani herdsmen from Berom land with immediate effect, adding that “the call has become necessary so as to stop further killings of our people.”

President of the Abuja Beroms, Peter Nyam Gai, who made the call in a press conference in Jos at the weekend, said: “If you follow the series of attacks by Fulani against the Beroms, you will realise that ten thousands lives have been lost, properties worth over N180 bilion have been destroyed.”

The group pleaded with the National Assembly led by Senate President David Mark to ignore the bill on creating grazing reserves for Fulani herdsmen.

Meanwhile, another fresh attack on Gero village of Jos South Local Government Area of Plateau State has been reported. The STF Commander, Major Gen Henry Ayoola, who confirmed the attack, said three people were shot but one died, adding that the other two are recuperating in a hospital.