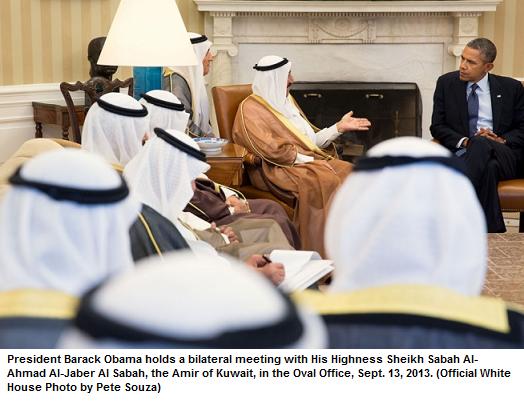 ConsortiumNews Exclusive: As Islamic militants gain ground in Iraq, Official Washington’s neocons and the mainstream media are blaming President Obama for ending the U.S. military occupation, but they ignore their own role in destabilizing Iraq with the 2003 invasion, Robert Parry reports.

After Islamic militants captured the major Iraqi city of Mosul on Tuesday, the danger of Official Washington’s false narratives again asserted itself, a direct consequence of the failure to enforce any meaningful accountability on the neocons and others who pushed the Iraq War.

The emerging neocon-preferred narrative is that the jihadist victory in the northern city of Mosul and the related mess in neighboring Syria are the fault of President Barack Obama for not continuing the U.S. military occupation of Iraq indefinitely and for not intervening more aggressively in Syria’s civil war.

For instance, the New York Times on Wednesday wrote that “the swift capture of large areas of [Mosul] by militants aligned with the Islamic State of Iraq and Syria represented a climactic moment on a long trajectory of Iraq’s unraveling since the withdrawal of American forces at the end of 2011.”

What is perhaps most striking about such accounts, which are appearing across the major U.S. media, is that the narrative doesn’t go back to the most obvious starting point: President George W. Bush’s illegal invasion of Iraq in 2003. It was that invasion and the ensuing occupation that hurtled Iraq and – to an extent – Syria into their current chaos.

Bush’s invasion, which was justified by bogus claims about Iraq hiding weapons of mass destruction, was in clear violation of international law, lacking the explicit approval of the United Nations Security Council. Yet, even after the WMD falsehoods were exposed and the body counts soared, there was almost no accountability enforced either on the public officials who carried out the aggressive war or on the opinion leaders who rationalized it.

In many cases, the same pundits and pols continue to shape U.S. public opinion today and are dominating the narratives on Iraq and Syria. Thus, there is almost no attention to the fact that before the U.S. overthrow (and subsequent hanging) of Iraq’s Saddam Hussein, there was no al-Qaeda threat in Iraq or Syria.

That threat emerged only after the U.S. invasion and the Bush administration’s rash decision to disband the Iraqi army. Then, as U.S. forces fought to crush Sunni resistance to Iraq’s new U.S.-backed Shiite-dominated government, Iraq became a magnet for Sunni extremists from across the Middle East, a force that coalesced into the Islamic State of Iraq and Syria.

Yet, the great divide in the Iraq War narrative came in 2007-08 when the neocons sought to salvage their blood-spattered reputations by inserting the myth of the “successful surge,” hailing Bush’s decision to escalate the war by dispatching some 30,000 additional U.S. troops. Though the “surge” initially was accompanied by a surge in killing, the gradual reduction in the violence was cited as proof of Bush’s heroic wisdom.

Other explanations for the decline in Iraqi violence were ignored, including the fact that some key policies, such as buying-off Sunni tribes in Anbar Province and applying high-tech methods for hunting down al-Qaeda leaders, were initiated before the surge although their impact only became clear later. And, the violence also subsided because the Iraqi people finally recognized that a timetable was being set for the removal of all U.S. troops, a process completed in 2011.

However, across Official Washington, the simplistic – and self-serving — conventional wisdom was that the “surge” was the sole explanation for the drop in the killings, a myth that had lethal consequences in 2009 when pro-surge hardliners, such as Defense Secretary Robert Gates, Gen. David Petraeus and Secretary of State Hillary Clinton maneuvered President Obama into adopting a similar “surge” in Afghanistan.

It should now be clear that neither “surge” was successful in altering the strategic arc of those two conflicts. At best, one could say that the military “surges” – paid for by about 1,000 U.S. military deaths each and many tens of billions of dollars – bought time for Bush and his neocon advisers to depart the government before the ultimate failures of their war polices became obvious, a “decent interval” that now has enabled these war architects to reframe the narrative and shift the blame to Obama.

The new narrative, which you can find across the media spectrum, is that Obama is to blame for the unfolding disaster in Iraq because he didn’t insist on continuing the U.S. military occupation indefinitely. He’s also being blamed for the spread of Islamic militancy in Syria because he resisted demands from Official Washington’s opinion leaders for a major U.S. intervention aimed at overthrowing Syrian leader Bashar al-Assad.

Thus, the same U.S. news media that fumes over speculation that Russia may somehow be aiding separatists in eastern Ukraine and sputters about Moscow’s violations of international law has been openly lusting for an expanded U.S. military intervention in Syria in clear violation of international law.

Though U.S. assistance to Syrian rebels has so far been limited to light arms and non-lethal supplies, U.S. allies such as Saudi Arabia, Qatar and Turkey have been the principal supporters of radical Sunni jihadists who have flocked from around the Middle East to wage war against Syria’s government, which is run by Assad, an Alawite, an offshoot of Shiite Islam.

Regarding Syria, Official Washington’s narrative is that if only Obama had intervened earlier in support of “moderate” rebels or if he had launched a full-scale bombing campaign last summer as he threatened, everything would have worked out just wonderfully – Assad would be gone and “moderates” would be governing Syria.

The fact that none of the U.S. interventions in the Middle East have had such a happy ending doesn’t deter this latest “group think” on Syria.

Besides the bloody examples of Iraq and Afghanistan, there is the case of Libya where Obama acceded to the demands of his war hawks, including Secretary Clinton and now-Ambassador to the UN Samantha Power. He committed U.S. air power to remove Muammar Gaddafi (who was later captured and murdered), only to see Libya descend into chaos, violence that has fed Islamic radicalism (including the lethal attack on the U.S. consulate in Benghazi in 2012) and has spread to Mali and other nearby African countries.

If Obama is to be criticized for his handling of the Middle East, it would make more sense to excoriate him for not making a clean break with the neocon strategies of the Bush years and for not purging the U.S. government of hawks who are too eager to use military force.

Rather than adopt realistic approaches toward achieving political solutions, Obama has often caved in when confronted with pressure from Official Washington’s still influential neocons and the mainstream media that follows their lead.

For instance, Obama could accept help from Iran and Russia in achieving a negotiated settlement of the Syrian civil war but that would require him getting down off his high horse about how “Assad must go.” This month’s Syrian elections – despite their shortcomings – showed that Assad retains significant public support from the Alawites, Shiites, Christians, secularists, and even some Sunnis.

But a workable peace negotiation also would require Obama to acknowledge that Shiite-ruled Iran has legitimate interests in the region, and he might have to shake hands with Russian President Vladimir Putin, the current bete noire of all the smart people in Washington.

Rather than dealing with the real world where the United States might have to settle for the best of the worst options, there are signs that Obama is again falling in line with the preferred neocon strategy of expanded U.S. military assistance to Syria’s supposedly “moderate” opposition, thus widening and prolonging the civil war and resulting in more chaos and death.

The notion that Syria’s “moderates” can somehow fight a two-front war against both Assad’s army and the Islamists who have been the most effective force against Assad has become the latest wishful thinking of Official Washington’s best and brightest, similar to their earlier certainty that the U.S. invading army in Iraq would be greeted with flowers and candies.

As the Washington Post’s David Ignatius – often a mouthpiece for U.S. intelligence – put it on Wednesday, “The administration is finally developing a serious strategy for Syria, which will include a CIA-trained guerrilla army to fight both President Bashar al-Assad and al-Qaeda extremists. In addition, (if skittish Arab allies agree), U.S. Special Operations forces will train Free Syrian Army units to create a stabilization force for liberated areas. If the ambitious plan moves forward, the hope is to train 9,600 fighters by the end of this year.”

Similar delusional thinking about a two-front war has been at the forefront of the State Department’s deliberations on Syria. Ex-U.S. Ambassador to Syria Robert S. Ford wrote on the  New York Times’ op-ed page on Wednesday, “with partner countries from the Friends of Syria group like France, Britain, Germany, Turkey, Qatar and Saudi Arabia, we must ramp up sharply the training and material aid provided to the moderates in the armed opposition.”

But it has been Turkey, Qatar and Saudi Arabia that have been most directly implicated in helping al-Qaeda-linked jihadists to flood Syria in the first place. Their thinking was that it would be better to have Sunni extremists controlling Syria than Assad because the Sunni powers and Israel see the spread of Iran’s regional influence as their greatest threat. [See Consortiumnews.com’s “Israel Sides with Syrian Jihadists.”]

There is also the question of whether there remains any real nucleus of “moderate” Syrian rebels who could carry out this two-front war. Last September, 11 leading rebel groups repudiated the U.S.-backed civilian opposition and sided with al-Qaeda-connected Islamists in their demands for a religious state to replace Assad’s more secular regime.

The New York Times reported then that the rebel groups were “distancing themselves from the exile opposition’s call for a democratic, civil government to replace Mr. Assad” and urging “all military and civilian groups in Syria to ‘unify in a clear Islamic frame.’” [See Consortiumnews.com’s “Syria Rebels Embrace Al-Qaeda.”]

Going back at least to 2003, this more complete – and more troubling – narrative would better inform the debate that Official Washington should be having about the twin crises in Iraq and Syria, a discussion that should not shy away from the devastating role that the neocons have played in undermining real U.S. interests in the Middle East and around the world.

However, if you rely on the mainstream media, you can look forward to the more truncated narrative, the one that the neocons prefer, the one that starts in 2011 and pins the blame on President Obama.

Investigative reporter Robert Parry broke many of the Iran-Contra stories for The Associated Press and Newsweek in the 1980s. You can buy his new book, America’s Stolen Narrative, either in print here or as an e-book (from Amazon and barnesandnoble.com). For a limited time, you also can order Robert Parry’s trilogy on the Bush Family and its connections to various right-wing operatives for only $34. The trilogy includes America’s Stolen Narrative. For details on this offer, click here.