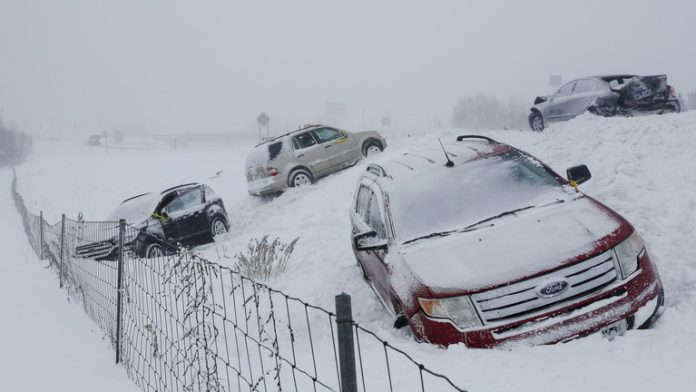 A massive winter cyclone described by meteorologists as a “once-in-a-generation” storm has knocked out power to millions of Americans and forced the cancellation of nearly 14,000 US flights during the busy holiday travel season.

Winter Storm Elliott pounded more than half of the United States this week, knocking out power to more than 1.4 million homes and businesses as of midday Friday, according to PowerOutage.US. After forcing 6,000 cancellations on Thursday, the storm grounded approximately 7,800 flights on Friday. According to FlightAware tracking data, airlines have already canceled 2,400 flights for Saturday and Sunday, and over 48,000 flights have been delayed since Thursday.

Temperatures plummeted as an enormous cold front swept across the United States and collided with warmer air to the east. Heavy rains fell ahead of the front in some areas, causing a flash freeze that brought down power lines and made roads treacherous. Blizzard conditions were created in the northern Plains and Great Lakes regions due to high winds and heavy snow.

Temperatures varied dramatically on opposite sides of the front. For example, around 2 p.m. on Friday, it was 55 degrees Fahrenheit (13 Celsius) in Boston, compared to minus 1 degree in Pittsburgh.

Because of the storm, FedEx and UPS have warned that Christmas packages may arrive late.