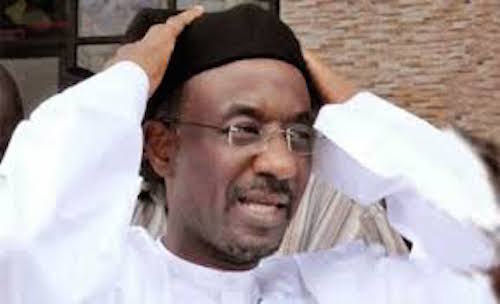 The Kano State House of Assembly has called off its investigation of alleged misappropriation of funds and other infractions by the Emir of Kano, Muhammadu Sanusi.

The House resolved to drop the probe following a plea through a letter by the state governor, Abdullahi Ganduje, which was read by the speaker, Kabiru Alhassan Rirum, on the floor of the House.

On Sunday, a coalition of civil society groups in the state had also joined in calling on the legislators to stop the exercise.

In his letter, Governor Ganduje said he was calling for the investigation to be dropped as a result of interventions by highly-placed personalities in the matter.

These personalities, according to the letter, include the acting president, Yemi Osinbajo; party leaders; former heads of state Ibrahim Babangida and Abdulsalami Abubakar; Sultan of Sokoto, Sa’ad Abubakar; and to businessmen and indigenes of the state, Aliko Dangote and Aminu Dantata.

Mr. Ganduje said although he was reluctant to interfere in the activities of the state’s legislative arm, he appealed to the lawmakers to “temper justice with mercy” and allow peace prevail.

“Much as I recognize your independence as a separate arm of government and who has right to investigate the emir, I am pleading with you to allow peace prevail”, he stated.

He said there had been a meeting in Kaduna over the matter “at the instance of some governors”.

“There is no gain saying (the fact) that the Emir Muhammadu Sunusi ii has admitted all his faults and mistakes and agreed to make adjustment. I think at this juncture, we should allow peace as been achieved to continue”, the governor stated.

The House subsequently resolved to drop the probe.

The decision is coming more than a week after the Kano State government’s anti-corruption agency suspended probe into the financial dealings of the Emirate council.

The Kano State Public Complaints and Anti-corruption Commission was investigating the alleged misuse of N6 billion.

The state’s House of Assembly had launched a separate investigation of the Emir following allegations of funds misappropriation, “defamation of character, breach of oath of office/oath of allegiance, abuse of office privileges and protocol, and political and religious interference”.

The chairman of the anti-corruption body, Muhyi Gado, said the commission was suspending its probe “indefinitely”.

He said the commission could not continue as the House was also conducting an investigation.

But a source told PREMIUM TIMES that the commission viewed the investigation by House of Assembly as interference and an effort to scuttle the probe.

“We are not happy with the coming in of the House of Assembly into this matter and we cannot continue doing the same thing with them; that is why we allowed them to do it themselves,” the source said.