Nigeria’s Acting President Yemi Osinbajo gave a touching speech on the commemoration of Biafra, 50 years after. “Greater together than apart” was the caption. But while the speech was eloquent and intellectually earnestly persuasive as is the character of the “system stabilizer” #2 man, the reality is far less eloquent, and even less persuasive. The truth is, what the Acting president delivered was a speech and an opinion, his opinion.

I’ll like to present the Truth and the Reality.

The reality is: there is agitation for a referendum. There is agitation for secession. There is also agitation for regionalism. We have seen and heard this in every single confab organised. We hear this on the streets and in the media every blessed day. There are hundreds of thousands if not millions of Nigerians clamoring for the secession of Biafra. There are equal numbers clamoring for an Odudua republic as there are multitudes fighting for republics in the north.

The truth is that there is disunity and lack of a sense of patriotism by those decided upon disintegration. Two years of APC has done little but increased and legitimized the call in more ways than one. The truth is, how much better are we together in geographical territory but not at heart? Is there any statistical evidence that we are better together? I am yet to see it.

The truth is that we were not amalgamated as one unit. We were created wisely by the British we love to accuse as a conglomeration of several parts. Nigeria was born as a true federation. Aguiyi Ironsi thought he was solving a problem when he decided to stitch Nigeria together as one single unit. Was this a wise move?

President Muhammadu Buhari campaigning under the umbrella of the CPC promised to restore true federalism in Nigeria. APC party leader Bola Tinubu has made the same call, predicting doom without it. The truth is that for some reason when in power, paid salaries from the government coffers, everything seems rosy and it is easy to say that we are better together. But for those deprived of all opportunity, is it so?

The truth is that correct me if I am wrong, but 95% of the South East did not vote for Professor Yemi Osinbajo and Buhari. As horrible as some of us regard Goodluck Jonathan, including many who voted for him, they would rather have him than have the Buhari-Osinbajo combination. How do we reconcile the fact that a section of us would rather have Jonathan who supervised the deaths of tens if not hundreds of thousands of Nigerians in the north, as leader than have the current regime? These are serious questions that we cannot simply wish away with eloquent presentations of our opinions.

Respectfully I listened to the Acting President narrate how he lost his friend Emeka as he described the sorrowful nature of war. But the reality is that we are at war. This is not a country in peace times. I have lost my friends, Ahmed, Murtala and Baba in the northeast. I have lost my friend, Anako in the South south. Many have lost their friends, killed by the Nigerian army in Onitsha and Zaria. And even more continue to lose their friends and loved ones every day, killed by rampaging terror herdsmen who this government sometimes pays to placate. Is this any different from the war Osinbajo recounts? Are these loses any kinder on the heart…because these were lost for no purpose compared to Emeka whose life was lost in a quest for Biafran independence? This is our current reality. This is the truth.

While Pastor Osinbajo referenced nations like Italy that have stayed as one, there are examples of others like India that have split into many pieces – Pakistan and Bangladesh– as has the former Soviet Union. Korea into north and south. Indeed Malaysia that we now adore birthed Singapore; both strong nations. As also there are examples of split nations like East and West Germany that have come together. You can find any kind of example you wish in the world. Nigeria’s unique path has little to do with the paths of those and everything to do with them perhaps. Perhaps we may split, but also perhaps after we split we may come back together, who knows. Keeping our heads in the sand and stifling agitation is a home recipe for making time bombs. 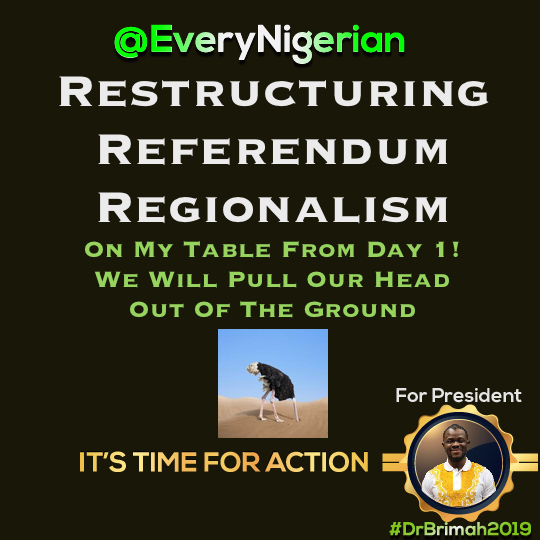 The truth is that so long as the government fails to listen to the opinions of its people, so long as the government fails to listen to the agitations of its people and fails to respond with clear actions to their pains, all we build today may be lost just as Libya and Syria were torn to the ground. According to the universal laws of entropy, disorganization is the natural trend and occurs rapidly. Two years have been dangerously wasted. It’s time to get down to this pressing business. The agitations of the peoples of Nigeria must be listened to and hearkened to with the three Rs on the table: Referendum, Regionalism and Restructuring. Or rather than be the ones that prevented calamity, we may be the ones who promoted it.