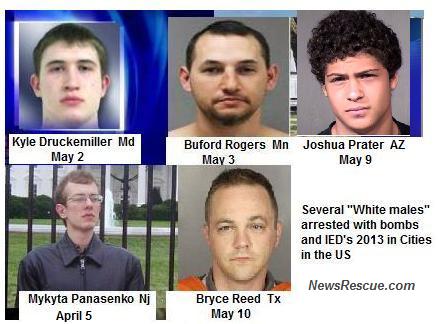 NewsRescue- Mykyta Panasenko, Buford Rogers, Kyle G. Druckemiller, Joshua Prater, Bryce Reed and an unnamed man at a California buyback were all arrested, fortunately, in different states in the US for possession of lethal bombs and IED’s in the week to and weeks since the April 15th Boston marathon bombing that claimed 3 lives and injured hundreds.

Mykyta Panasenko, 27, was arrested April 5th, a week to the Boston bombing in New Jersey en route New York. Myaka, a Rutgers student was found to be in possession of two homemade explosives on an NJ Transit train. More devices were found in his home, His arrest was quiet and the media only discovered during his charging in court. He had two destructive devices, specifically improvised explosive devices (IEDs) constructed from a cylinder containing Pyrodex (black powder).

May 2nd, Washingtonpost: The evening of April 12, the father of a 19 year old girl Kyle G. Druckemiller was dating, got suspicious of him and went into his daughter’s bedroom and looked through Druckemiller’s duffel bag, according the affidavit. The man found what appeared to be two pipe bombs and called police. the explosive devices weer made out of fireworks materials and the other out of the heads of matches, according to charging documents.

May 3, according to Foxnews: Buford Rogers, 24, of Montevideo, was arrested May 3rd after authorities searched his home and found guns and explosive devices, according to an FBI news release. The Associated Press reports Molotov cocktails, suspected pipe bombs and a Romanian AKM assault rifle were among the weapons found. An affidavit said Rogers admitted firing the weapon at a gun range in Granite Falls.

May 7th: During a gun buyback event in Los Angeles, one man(name withheld) surrendered a homemade pipe bomb, explaining that he has no more desire to use it. California police then immediately proceeded to arrest the man for owning it in the first place. “This is not a pipe bomb buyback. This is a gun buyback,” Los Angeles Police Chief Charlie Beck told CBS Los Angeles. “Pipe bombs are illegal to possess, illegal to manufacture.”

May 9th, a Maid found a pipe bomb in 18 year old Joshua Prater‘s bag in Tempe Arizona. She took it to the fire department. “There was fuse that was coming out from the device which would be how you light it and it would cause the fuse to go in there and explode,” said Tempe Police Dept. Sgt. Mike Pooley. “The bomb was ready to go. It was active. All it needed was the trigger.”

And today, May 10th, the first responder at the Texas deadly fertilizer plant explosion, April 17th, two days after the Boston bombing, Bryce Reed was arrested for possession of pipe bombs. This is highly suspicious, considering his being on location of the explosion. Reed was among those who responded first to the fertilizer plant explosion and served for a time as the incident commander at the site. According to CNN:

Authorities on Friday said they are launching a criminal investigation into last month’s blast in the town of West, but have not said if the arrest of Bryce Reed is connected. Local sheriff’s deputies were called on Tuesday to a residence where they found components for a pipe bomb, according to a criminal complaint affidavit. The officers determined that Reed had given the materials to the resident of that home last month. Among the materials found were a galvanized metal pipe, a fuse, coils of metal ribbon and several bags of chemical powders, the affidavit states.

Are these in any way related and are they connected to the recent Boston bombings which have so many unanswered questions and mix-ups in virtually all of the official versions of the details of events? Are young Caucasian males in America just getting more adventurous with readily available guidelines to make bombs on the internet, or is this all a more sinister plot that could have been tied to the Boston bombings?

Is a White extremist network waging an internal terrorism war on the US?

It was observed that during the Boston marathon bombing, the first suspect was a Saudi national, Arab, the second suspect was a “black male,” and later they asked the public’s help in identifying the Chechnya Muslims who were on their watch list. It may be useful to broaden the suspicion profile in consideration of these recent events.

NewsRescue is not sure that the FBI have made these connections, but we would like to suggest they do and investigate for the safety of the American public.