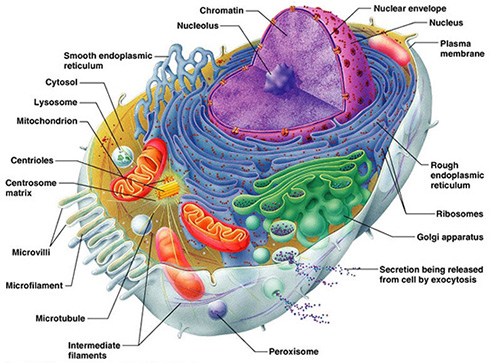 The basic structural unit of creatures, the cell, is incredibly complex enough to leave people amazed. Just like the existence of a single cell, the harmony and cooperation in the cell is very impressive. As the structure of the cell and systems in it are further investigated and new details are found, this perfect order is seen more clearly.

A single cell may be said to resemble a large city with its operation systems, communication networks, transportation and administration. The power plants generate the power used by cells; the plants generate the enzyme and hormones which are essential for life; the data bank including all information regarding the products to be manufactured; the complex transportation systems and pipelines transferring the raw materials and products from one region to the other; the laboratories and refineries separating the raw materials taken from outside into the useful parts; the expert cell membrane proteins executing the enter and exit controls of materials to be taken in or sent out of the cell create only a part of this structure.

Just like cities, there is a dense traffic flow caused by the molecules like “moving on the boats”, “walking” and “taking hands” like people and by the “trucks carrying the organelles” in the cells. However, there is a great order in cells against the traffic congestion in these cities.

An investigation demonstrating this smooth order was made in Exeter University in recent days and the results were published in the journal Nature Communications. This study has shown one more time that the dispersion of organelles in the cell is not random at all, and is caused by a motion depending on energy.

As is known, organelles are specialized functional units of cells. The organelles for the cell are the same as organs in the body. Each organelle has special duties to ensure the sustaining of the cell. The order in the arrangement of organelles inside the cell is also exceptional. Let us review the results of the research showing how this positioning occurs in the cell.

The distribution of organelles is executed by a special molecule named  ATP (adenosine triphosphate). The energy attained from food items is first packaged in ATP. Later on, this energy is used in all the production and transportation processes that take place inside the cell. Actually, ATP is like the fuel for molecular motors, which transport its cargo along the fibers of the cytoskeleton. Just like  trucking rigs carrying a load, organelles are also carried by means of this fuel from one place to the other as to the needs. During the transportation process, other organelles are also both dragged and kept under the impact of a turbulence increasing their motion. However, these motions never occur randomly. Organelles do not get clustered in a certain part of the cell, or become dispersed randomly; in short, their distribution does not cause any disorder.  Quite the contrary, such organization of the cell’s components is essential to ensure their interaction and persistence of the cell. Lead researcher Professor Gero Steinberg, Chair in Cell Biology and Director of the Bioimaging Centre at the University of Exeter, said the following on this matter:

“Many people had previously assumed that organelles are randomly-distributed, as that’s how they appear. Our research has revealed a new fundamental principle of the way cells organize themselves — that they use energy to create this seemingly random, even distribution. This allows the organelles to interact with each other throughout the cell.”[i]

If organelles were distributed randomly during their transportation as claimed prior to this research, certain diseases would arise. In fact, organelle clustering without proper distribution inside the cell is found in some human disorders, such as Zellweger Syndrome, which is a fatal disease. Children born with this disorder may only live until the age of one”.[ii]

While evolutionists cannot even explain the origin of a single protein molecule, they keep up with their allegations that the cell came into existence through coincidences. The impasse of evolutionists is not limited with their not being able to explain how the protein and cell originated: Just like the order in the distribution of organelles in the cell, they are obliged to give an account for the existence of thousands of other mechanisms, and how inorganic molecules could give structure to such organizations that necessitate confounding consciousness, information and intelligence.

This new scientific research carried out by Exeter University makes evident that organelles in the cell are not dispersed randomly and they cannot be moved from one place to another without an intelligence that directs them. There is no doubt that this perfect order in the cell is not the coincidental ability of organelles that lack intellect or consciousness. On the contrary, that is one of the most profound instances of Almighty God’s infinite power and His artistry in Creation. God reveals the following in a verse:

“That is God, your Lord. There is no god but Him, the Creator of everything. So worship Him. He is responsible for everything.” (Surat al-An’am, 102)