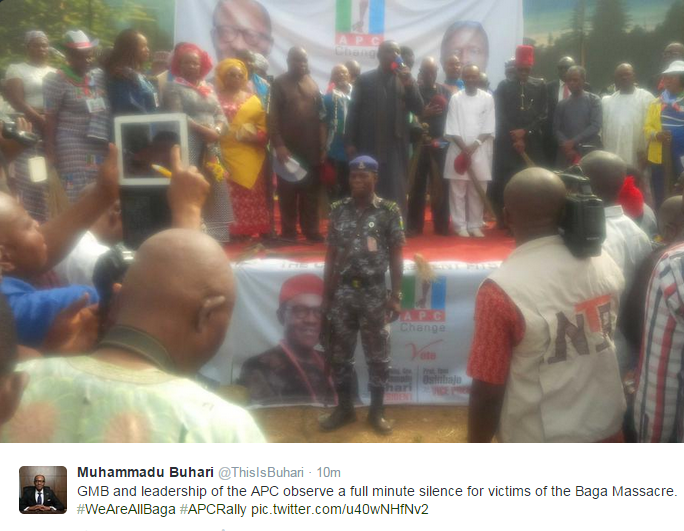 The Buhari campaign observed a one-minute prayer silence for the victims of the last weekend massacre in Baga fishing local government, Borno, Nigeria. Over 2000 civilians were killed. Nigeria’s president has been criticized for empathzing with the Paris attacks but failing to comment on the Baga genocide.

GMB and leadership of the APC observe a full minute silence for victims of the Baga Massacre. #WeAreAllBaga #APCRally pic.twitter.com/u40wNHfNv2

Just before the rally, @Thisisbuhari and @profyemiosinbajo meet the Anglican Bishop of Awka Diocese. pic.twitter.com/4ElC77VCr3

We all rise as the Obi of Awka arrives. Such an eloquent and classy king. You’d love him, Had everyone in stitches. pic.twitter.com/tIYLCt0rFe

Finally, we arrive in Awka, Anambra State and @ThisisBuhari is received by Chris Ngige and the APC delegation. pic.twitter.com/aAGNNes9lO