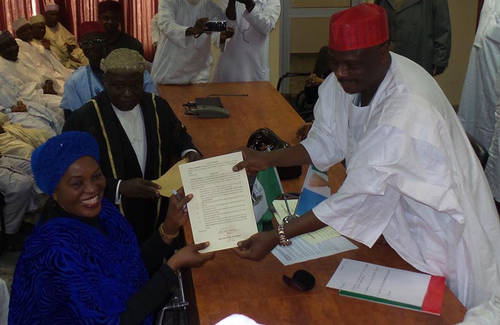 Justice Mahmoud has on two occasions faced discriminatory challenges regarding state of origin and her elevation to Court of Appeal rejected because she is from Benue state.

She replaces Justice Shehu Atiku, who retired from judicial service. The governor said Patricia’s appointment is in compliance with section 271 subsection 4 of the Nigerian Constitution, which states that the most senior judge acts as Chief Judge pending the appointment of a substantive Chief Judge.

Patricia Mahmoud, an Idoma from Benue state is a judge of the Kano State High Court. She joined the state Ministry of Justice in 1983 and rose to become a Director of the Drafting and Research department. She was appointed to the bench in 1992. She is active in the Association of Women Judges in Nigeria and abroad. She has been the Kano State Coordinator for Women in Nigeria (WIN), a women’s rights organization for years.

Justice Mahmoud is married to Mr. A. B. Mahmoud, SAN, a one-time Solicitor General and Attorney General and Commissioner of Justice of Kano state.

However, it was a single success story because as it turns out the NJC is still strictly applying the Guidelines.
It’s sad that we are holding on tightly to such a retrogressive and discriminatory ‘guideline’. And a huge shame that the Judiciary is guilty of such injustice! I cannot stress the irony there.
As for me personally, this is part of the reason that when people ask if I would want to join the bench in the future I reply “HELL NO!”