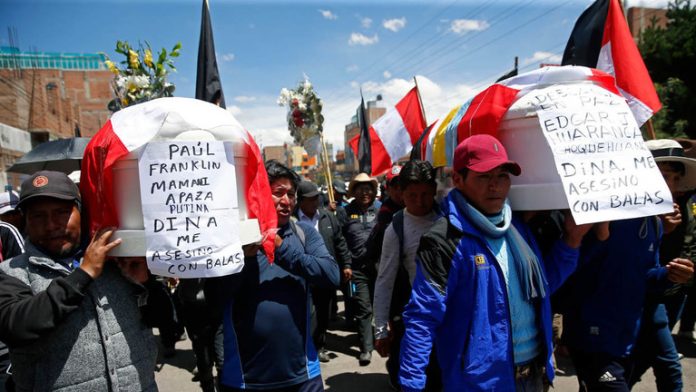 The Lima government confirmed the death of the first police officer since protests against President Pedro Castillo began last month. Protesters in the southern city of Juliaca ambushed a patrol car the day before, after 17 local civilians were killed in a clash with police the day before.

The burned remains of Officer Jose Luis Soncco Quispe were discovered near the patrol car that was attacked on Tuesday morning, according to Peru’s Interior Ministry. Ronald Villasante Toque, his partner, was injured and flown to a Lima hospital. In a phone call to headquarters, he described a “savage attack” on the police vehicle by over 300 people.

According to initial reports, the attackers also took the officers’ body armor and weapons, including two service pistols and an AKM assault rifle. However, police later stated that the weapons were discovered inside the torched patrol car.

Juliaca is located in southeastern Peru, near Lake Titicaca and the Bolivian border. At least 17 civilians were killed and 30 others were injured in clashes with Peruvian National Police (PNP) near the local airport on Monday. Protesters decorated their caskets with handwritten notes declaring “Dina murdered me with bullets” during the funeral procession for the deceased on Wednesday.

Interior Minister Victor Rojas claimed the deaths were the result of officers acting in self-defense against 9,000 people who he claimed tried to storm the airport and attack police with homemade guns and explosives. The mob became “impossible to control,” Rojas said, accusing the protesters of wishing to create “chaos upon chaos.”

On December 7, Castillo was arrested and impeached after attempting to dissolve Congress and call an early election. The lawmakers charged him with rebellion and replaced him with Vice President Boluarte. Castillo’s supporters see this as an unconstitutional coup against democracy. Peru has had five presidents in the last five years, with Congress using the constitution’s “moral incapacity” provision to remove those they dislike from office.

On Tuesday, Castillo tweeted from jail that history will remember Peruvians “murdered for defending the country from the coup dictatorship,” and that “terror is the last bullet of a regime cornered by the people.”

According to official government figures released on Tuesday, at least 47 people have died as a result of the protests. This number includes the officer, 39 protesters, and seven civilians killed in “traffic accidents related to protest roadblocks.”

Last week, Police General Maximo Ramirez de la Cruz stated that over 300 police officers had been injured in clashes with demonstrators, with 19 of them being hospitalized.