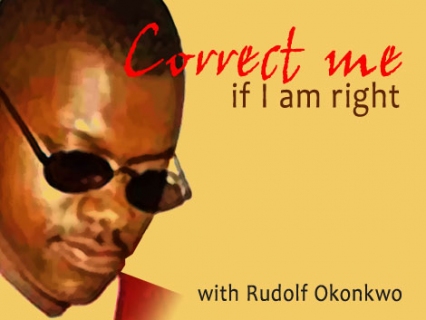 by Rudolf Ogoo Okonkwo on SaharaReporters

Over four years ago, I was sworn in as the President of our beloved country. I was charged with various responsibilities, amongst which was the protection of lives and properties of our citizens. It was the highest of all my responsibilities.

I regret to say that I have failed you all in that regard.

In the last few years, we have been confronting a big and vicious band of terrorists who are determined to bring our country to its knees. We have approached the challenges through various means available to us. We have tried dialogue, to no avail. We have tried to secure our borders and upgrade our security systems but our efforts have fallen short. We have also taken the fight to them but we have not vanquished them. I personally accept responsibility for these failures.

In all our efforts, what we have not done is treat them as irredeemable enemies. In everything we have done, we have considered them as one of us who have only gone astray.

I’m declaring full war against all the enemies of this country who are working to bring Nigeria down. I’m committing the fortune of this country to their total annihilation. I will not be the last president of Nigeria. Also, I do not want to hand over to my successor a country that is in worse shape than it was when I took over.

Every day that our daughters are held by those monstrous terrorists is another day that demands from us all a deeper commitment to the ideals of crafting a just and sane society for our children. We must sacrifice personal ambition for our nation’s revival. We must shake ourselves off the ambivalence chair, if our nation must stretch to touch the sky. We must discard the lure of cynicism for a drive into the horizon on the hill. We must sacrifice the comfort of today for the nation to reap the rewards of tomorrow.

To that end, I have decided to impose full martial law across the three North Eastern states of Borno, Yobe and Adamawa. I’m suspending all the democratic institutions of the states for the next six months. I have ordered our military to move into these states and take control of law and order, and preserve lives and properties. Military administrators will be appointed tomorrow to head the three states for that time period. Northern Nigeria must be restored to order in my own time.

Along the same line, I have decided to commit the rest of my days as president to the fight to bring back peace and tranquility across the North East and beyond. There is no folly as grave as watching the soul of our nation wither away while we engross ourselves in the fight to gain and preserve power. Consequently, I will not seek and will not accept the nomination of my party for the presidency of Nigeria in 2015.

This is not a time to play politics. My job from now until May 29, 2015 is to restore the dignity of Nigeria. I will get the North back into the fold of regions of this nation where every citizen is free to live, work, and prosper. Come 2015, I will conduct a credible election that will give Nigerians an excellent opportunity to elect their next generation of leaders.

Working with the National Assembly and the delegates at the National Conference, I intend to bequeath Nigerians a constitution that makes sense. State governors must assume full responsibility of securing the citizens of their states. To achieve that, they need the necessary tools. I will ensure that the next set of governors resuming on May 29, 2015 will have state police to help them achieve that.

I reject the argument that we are not ready for state police. The existence of state police will not mean the elimination of federal police. The federal police will still supersede the state police and will ensure that potential excesses and abuses are prevented. Those we give responsibilities must have the resources to accomplish the task we ask of them. And with that responsibility and resources they owe us results. And when they fail, we have every right to hold them accountable.

Similarly, I’ll work with the National Assembly and the delegates to the National Conference to ensure that from May 29, 2015, a clear and equitable system that rotates the presidency of this country is enshrined in the constitution of Nigeria. The premium for power at the center is the chief cause of our strife. Until we get to the point when it does not matter who is the president, the rotation of the presidency across the geopolitical zones will reduce tension and give every nook and cranny of this country a sense of belonging.

In issues large and small, I have renewed my commitment to strengthening our foundation and to bringing about a more equitable society for us all. We cannot have peace without addressing lingering injustices of the past and the present. To create a nation that will last for thousands of years to come, we must move our politics. That is my new calling and for the next 300 and so days, I am dedicating my whole energy to remedying such.

I reject the idea that our fate is that of Afghanistan or Somalia. Not this land of our fathers. I reject the conclusion that we are on the path of Pakistan.  I proclaim an alternative path. I believe we can march to Malaysia by way of the boulevard to Brazil following the signs of Singapore.  The first step to such pursuit is a disengagement from politics. My days of playing politics with the future of this country are over. That’s the debt that I own our girls who have been suffering in the forest of Sambasi for over forty days and forty nights.

We cannot wish away our challenges. We must confront them with seriousness. I recognize that corruption is at the heart of the wastes that have stunted our growth. In this 21st century world, we must get the works of the government of this country out of dark rooms. Transparency and accountability must not just be catch phrases, we must live in them and them in us.

I hereby declare a total war against corruption.

Tomorrow, I will publicly release my assets declaration forms that I submitted to the ICPC. And I will direct all my ministers to do the same. State governors and local government chairmen must all make public their assets. I am directing the secretary to the government to publish the salaries and allowances of all civil servants in the country beginning tomorrow.  Nigerians have the right to know how much they pay the people who work for them.

I’m ready to work with all those willing to clean up our country. We must heal the wounded spirit of this nation. We cannot allow ourselves to be crazy because some crazy men are after us. We have serious challenges in this country and we need serious minded platoon to come and join me in tackling them.  Come today for today is still timely. Let us go and bring back our girls. And in the process, bring back our country.

God bless you and may God bless the Federal Republic of Nigeria.