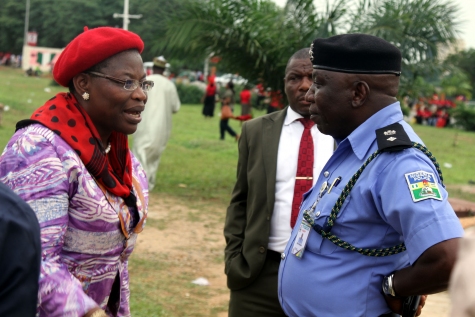 May 29, 2014 NewsRescue In an increasing show of desperation fulfilled by violence and intimidation, the Nigerian government is reported to have hired hooligans to disrupt a Bring back our girls protest in Abuja, Wednesday. This follows serial threats and ‘advise’ by the government for Nigerians to stop demanding the government do all it can to recover over 200 abducted girls, taken by Boko Haram since mid April. The minister of information also accused all those protesting for the girls to be the opposition party. 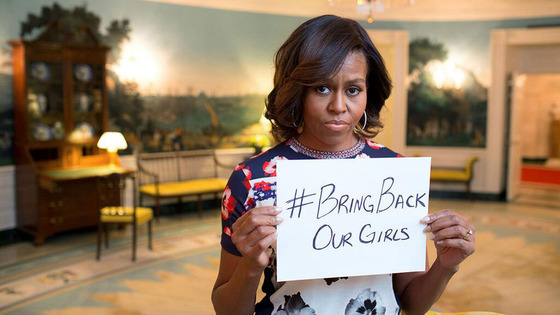 The hooligans who threw chairs and bottles at protesters who included Oby Ezekwesili were carrying posters of Nigeria’s president, Goodluck Jonathan. When the police intervened, they advised the Bring Back Our Girls protesters to leave, saying that ‘the hooligans were coming,’ rather than securing them from the onslaught. In Lagos today, protests by polytechnic students were also attacked by the nation’s security agents who violently broke up the protests and even harassed and arrested SaharaReporters crew and smashed the media camera to bits. Students being teargassed by the police
By Saharareporters, New York

A team of anti-riot police brutally attacked a peaceful protest by students of Nigerian polytechnics in Lagos earlier today. The police tear-gassed and assaulted the protesters, and arrested more than 100 students and reporters, including Segun Olawoye, a citizen reporter affiliated with SaharaTV.

The arrested students accused the police of also using tear gas on them after they were herded into prison vehicles known as Black Maria.

The protesting polytechnic students said they wanted to draw attention to their plight as they have been out of school for close to nine months owing to a general strike by their lecturers. The protesters accused the Goodluck Jonathan administration of triggering the strike by refusing to honor a 2009 agreement with polytechnic teachers across Nigeria.

Our sources said trouble started as soon as the protesters moved from Yaba College of Technology in the Yaba area of Lagos towards Lagos Island. “We were attacked by policemen around Adekunle bus stop area,” said one source. “The policemen viciously beat up many students after firing into the air and bombarding us with teargas.”

The police then rounded up numerous injured and gasping protesters and threw them into waiting prison vans where they were stung with more tear gas fumes. Mr. Olawoye, who was covering the protest for SaharaReporters, had his cameras seized and smashed by the rampaging policemen.

SaharaReporters contacted police spokesman, Frank Mba, regarding the repressive action of the police towards peaceful protesters. Mr. Mba said he could not ascertain which unit of the police carried out the attack, stating that he was traveling to Abuja by road.

Just before going to press, SaharaReporters learned that the police had released more than 100 students who were initially detained inside crowded Black Maria vehicles parked at the entrance to the Third Mainland bridge via Adekunle area in Yaba, Lagos.

Two of the released protesters told SaharaReporters that they almost suffocated from the heat inside the vehicles compounded by teargas fumes.