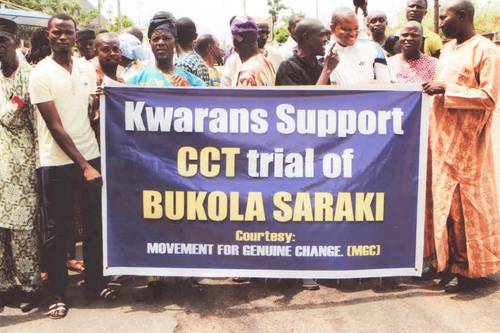 A non governmental organization, Movement for Genuine Change on the state of affairs in Kwara State has declared their support for the trial of Senate President Bukola Saraki at the Code of Conduct Tribunal.

The group, which staged a peaceful rally at the Flower Garden, Ilorin yesterday urged federal government to repatriate all the alleged stolen money from the former governor to Kwara State for the payment of civil servants, pensioners and workers in the state.

They displayed different placards such as:” Buhari, No compromised on Corruption; Nigeria is bigger than anybody; Saraki killed Trade Bank; Return all stolen money to Kwara to pay pensioners, workers; Saraki resign now; No more hiding place for the thieves, among others.

While addressing journalists, the group spokesman, Alhaji Tunde Muhammed said Senator Saraki has brought shame to the people by all his actions and with his current trial at the Code of Conduct Tribunal.

“He has turned Kwarans to a laughing stock. However we, the People of Kwara are happy that he is now being prosecuted even though, we expected that long before now, he should have been made to face all corruption related matters that he is alleged to have committed.

“While we support Senator Saraki’ ongoing trial at the Code of Conduct Tribunal, we warn that nobody should attempt to erect any barrier against justice by trying to shield Saraki’s prosecution.

“While we support President Buhari’s anti-corruption war, we noted with sadness that it is only in this country that when the poor and the week transgress the law, the full weight of the law through its punitive mechanism is crushingly brought to bear on them but when the ‘powerful, the mighty, and the rich” offend the law, they do so with relish without the mildest punitive reaction”

Muhammed added that before the emergence of Senator Saraki’s in Kwara state politics, the people of the state and their leaders have no history of “this type of indecent behaviours”.

“Senator Saraki’s case is that of shameless leadership that has always been jumping fence in the face of legitimate prosecution process.”

He said the people of Kwara State are grateful to President Muhammadu Buhari and law enforcement agencies for having the courage to take Saraki to court.

Meanwhile, the group alleged that the Chairman of Peoples Democratic Party (PDP),Kwara State, Chief Iyiola Akogun was invited by the police for questions over their protest on Senator Saraki.

Muhammed who confirmed his arrest after the group protest said he received a phone call by OC Operation of the Kwara State Police to come and he honoured the invitation.

He told journalists that when he got there, he was asked whether the PDP is holding rally today and he said no but he was not released and was still in custody till the time of the rally was over.

When contacted, the Police Public Relation Officer (PPRO), Kwara State Command, ASP Ajayi Okasanmi denied the arrest of Chief Iyiola Akogun. He said “there was nothing like that”.