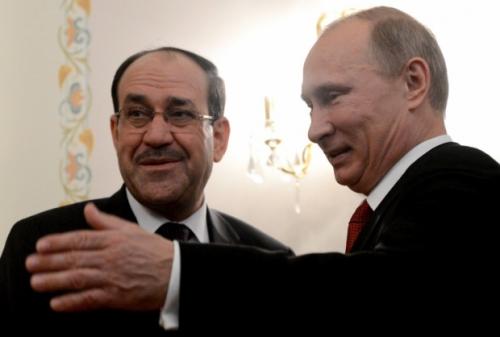 Two days ago, before it was formalized that the US tacitly, if not explicitly, now supports the removal of the Iraqi Prime Minister whom it itself had helped elect, we summarized the geopolitical tensions and “national interests” in Iraq, which is shaping up to be a proxy war that makes last year’s Syrian escapade pale by comparison, as follows:

The situation in Iraq, already a jumble of domestic sectarian violence, is now pitting virtually all major (and regional) international players against each other as well. There is:

It was the bolded text that was of biggest interest because as we noted the next day, when discussing the next steps for ISIS, we said that “One wonders how long until the mercenary force finds its latest major backer, because for all the western, US-led intervention, both Russia and China are oddly missing from the scene. We expect that to change soon.”

Because clearly one can’t have a global proxy war without China, and certainly without Russia.

Well, we said we expected Russia’s conspicuous absence to “change soon”, and so it did: within just 24 hours. Because apparently all Putin was waiting for was for Obama to pick sides (i.e., not Maliki) before the Russian leader made it clear whom he sides with. US, helpfully obliged yesterday morning when we also reported that “US Slams Its Former Iraq Puppet: “The Maliki Government, Candidly, Has Got To Go“.”

So what does Putin – who as a reminder is heavily invested in Iraq’ massive West Qurna-2 oil field via Lukoil – do? Why announce his undying support for Maliki, of course, and as AP reported, the former KGB spy offered Iraqi premier Nuri al-Maliki Russia’s total backing for the fight against fighters who have swept across the country, as well as his full support for the embattled prime minister.

The Kremlin said in a statement that al-Maliki informed Putin on Friday about his government’s steps to combat the “terrorist groups in the north of the country.” It added that the insurgency threatens security of the entire region.

Putin confirmed Russia’s “full support for the Iraqi government’s action to quickly free the territory of the republic from terrorists,” the Kremlin said, adding that Putin and al-Maliki also discussed bilateral cooperation.

Putin’s expression of support for the embattled Iraqi prime minister comes as al-Maliki’s rivals have mounted a campaign to force him out of office, with some angling for support from Western backers and regional heavyweights.

And just like in Syria from 2012 to 2013, the chessboard is once again set, with a regional middle-east conflict, this time in Iraq, merely serving as the proxy staging ground in which the Iraqi PM, once an obedient US puppet but now an enemy of Saudi Arabia and thus the US, “simply has to go” in the words of Dianne Feinstein, has suddenly become the fulcrum issue behind yet another soon to escalate conflict between Russia and the US.

One thing is certain: the more the US (and Saudi Arabia, and Qatar) pushes for Maliki’s ouster, the more involved Russia will become with its offers of support and bilateral cooperation. And if the Syrian fiasco (for John Kerry) is any indication, Russia is about to expand its “national interest” sphere of influence by one more country.