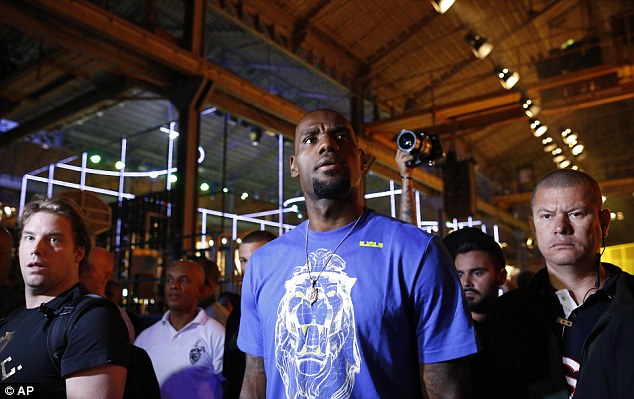 Basketball superstar LeBron James landed in Rio de Janeiro ahead of the World Cup final on Sunday, and he said the Maracana showdown is bigger than the NBA Finals.

Fresh from announcing his decision to leave the Miami Heat and return to his first team the Cleveland Cavaliers, James touched down in Brazil to watch Germany face Argentina.

According to ESPN.com, the two-time NBA champion signed a two-year contract with the Cavaliers worth $42.1m (£24.6m).

Appearance: James spoke in public for the first time since announcing his decision to return to Cleveland

Speaking at a promotional event in Rio, James said; ‘This is bigger than the NBA finals in the sense of the world. You have all the players representing their countries. It’s the ultimate sport. You have to play as a team.

But James declined to pick a winner between Germany and Argentina after meeting hundreds of fans and watching young Brazilians show off their basketball skills at a warehouse near Guanabara Bay.
Read more: http://www.dailymail.co.uk/sport/worldcup2014/article-2690377/LeBron-James-says-World-Cup-bigger-NBA-Finals-arriving-Rio-agreeing-lucrative-contract-Cleveland-Cavaliers.html#ixzz37NyLztyu