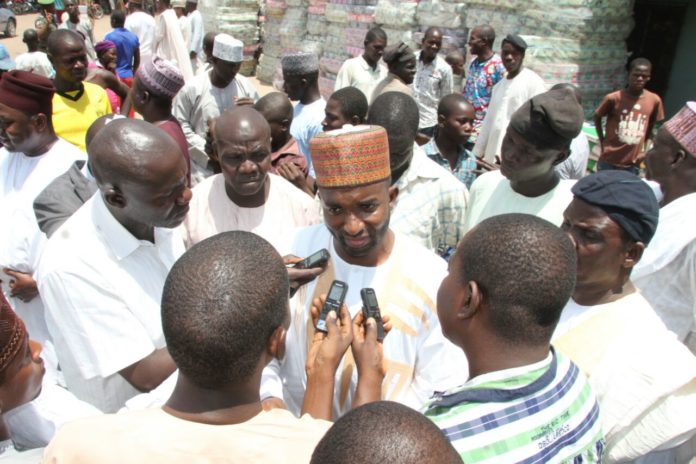 It is with great trepidation and yet with knowledge that progressives will respect the idea at which prompted the Integrity Transparency and Good Governance (ITAG) to draw their attention to what is best described as an attempt to lead Adamawa Central to a progressive halt.

ITAG reliably gathered that the said attempt clearly depicts an intent to once again lead Adamawa to a repeat of the past, highlighting a dangerous signal to the continued growth and development of the Adamawa Central Senatorial Zone.

Looking back when Prof Jibril Aminu occupied the exalted Senatorial position in the last 12 years, an attempt was made to launch a recall on his personality. We can all recall the thwarted attempt only result to the beginning of the backwardness of the present day Adamawa State which today is considered as the least developed in the entire country.

The then powered would be arranged a kangaroo collation of signatories sponsored over 200 people to the Independent National Electoral Commission (INEC) headquarters in Abuja to present the documents led by the then Deputy Governor Bello Tukur but were left roaming at the entrance of the INEC for hours having been denied entry at the end. It was a failed attempt. But what subsequently followed should have served as a great lesson to the perpetrators of such acts.

Right from Bello Tukur who after leading the team was returned rejected by the plotters was left with the option of coming back to bow and seek forgiveness before Prof. Jibril Aminu, his other mentors were left in a confused state trying to sort out political problems they caused leading to what translated to the continued backwardness of the state.

Today, there seems to be another round of attempt to stage another recall on the occupant of the senatorial seat of the Central Zone Senator Abdulaziz Nyako, deliberately to deny the zone its share of democracy dividends.

It is evident the Central Zone is now enjoying road constructions, just as the government is preparing to offset its outstanding backlog of salaries, these political skimmers are looking into the possibility to derailing the government to utilize its resources in another venture that will have a negative impact, it is unfortunate, it is high time we allow progress in our dear State, it is high time we reject any attempt to draw attention of political office holders from carrying out their responsibilities. Let’s reject any attempt that will divert the attention of government from positively utilizing its resources to the detriment of those that were left unpaid.

Allow Adamawa Central Senatorial Zone to enjoy its fair share of dividends of democracy. It is on record Senator Nyako has left much to be desired in bringing succor to his electorates.

It is evident the victims of insurgency especially in his zone received donations of food items, cooking materials, beddings, toiletries especially those in Gombi and Yola South LGAs.

Over 12 thousand women entrepreneurs involved in micro economic activities received several support. Therefore, enough of a calculated attempt to deny the Central Zone its opportunity to move away from the bondage of under development.

Under the 1999 Constitution of Nigeria, sections 69 and 110 provide for the manner by which recall may be effected in both federal and state legislative houses. For the purpose of clarity, it is important to reproduce verbatim this constitutional provision on recall. Section 69 states:

“A member of the Senate or of the House of representatives may be recalled as such a member if:

(a)       there is presented to the Chairman of the Independent National Electoral Commission a petition in that behalf signed by more than one-half of the persons registered to vote in that member’s constituency alleging their loss of confidence in that member; and which signatures are duly verified by the Independent National Electoral Commission;

(b)       the petition is thereafter, in a referendum conducted by the Independent National Electoral Commission within ninety days of the date of receipt of the petition, approved by a simple majority of the votes of the persons registered to vote that in member’s constituency.”

For the sake of simplicity, the above provision is broken down into the following steps:

iii.        The petition must be submitted to the Chairman of the Independent National Electoral Commission;

(a)       It must verify the authenticity of the signatures;

(b)       It must conduct a referendum within ninety days of the receipt of the petition in order to get it approved by a simple majority of the votes of registered persons in that constituency. For example, if only 500 out of 1000 registered voters turn out for the referendum, a simple majority of which may be anything from 251 votes upward will be enough to approve the petition.

Has Recall Ever Been Conclusively Used In Nigeria?

There is no information that it has ever been used successfully to remove a law-maker in Nigeria either at the federal or state level. This does not however mean that its retention in the Constitution is of no use. The mere fact that we have it in the Constitution promotes good governance and accountability because the law-makers know that there is a process which may be invoked to effect their removal, if they fail to satisfy their people. Although a process of recall was initiated against one Mrs. Hembadoon Amena representing Katsina-Ala West State Constituency in Benue State in 2013, it was later stalled in 2014. The civil unrest which resulted in the burning of some houses and destruction of property due to the move to recall this law-maker may not be unconnected to the truncation of the recall process.