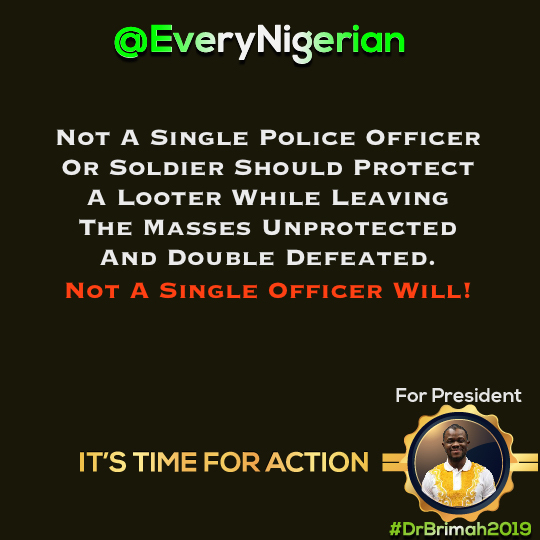 I have listened to the audio of your speech which was sent to me privately by some concerned individuals. I also observed the level of disgust with which you are able to see the mess that makes up this our beloved nation Nigeria. I cannot help but make some observations that would certainly help your enthusiastic patriotism.
One mistake we continue to make is continuing to strive for solution under the same decadent system and pinpoint on individuals as being the problem whereas our problems lie in the system managing the individuals and not the individuals themselves.

Under this same system running the nation, not even an angel can do any better. What we actually need need is a total change of system which will make it such that not even the devil can act wrongly under it.

No amount of reform or installation of honest individuals in mantle of power can change our country as has just been proven by this current regime.

What we actually need is a total Revolution that will oust the current system, make it impossible for the wrong people to be in charge and most importantly emancipate the nation from imperialists exploitation that gives room for the worst and most corrupt elements to be in charge of governance.

Just free our leader Sheikh Zakzaky and get the true solution to our problems from him. He is  simply a victim of the same imperialists exploitations that is bedevilling the nation. They want to eliminate him because they know he has the true and only solution which would obviously terminate their whims and greed and set the nation on tracks of developmental progress.

Don’t be deceived by the religious posture and inclination of the revered Sheikh, he is indeed a man of God but there is indeed more to that and that explains why he has a first class honor in Economics and is eulogized and adored by both  Muslims and non-Muslims alike.

Struggling and calling for the unconditional release of Sheikh Ibraheem Zakzaky is the same as struggling and striving for true freedom and emancipation of Nigeria.