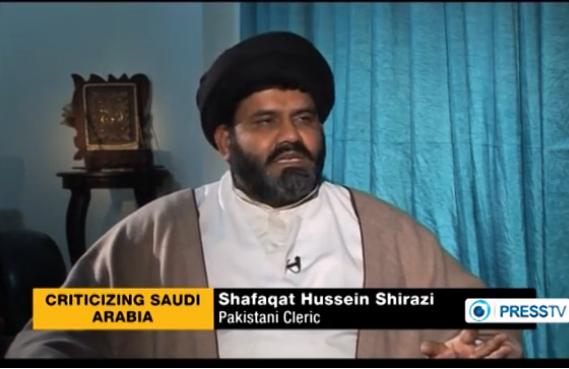 Sayyed Shafaqat Hussein Shirazi, the deputy secretary general of Majlis Wahdat-e-Muslimeen, which is the largest Shia political organization in Pakistan, made the remarks during a interview with Press TV on Thursday.

“Not one day passes without a martyr falling in Karachi, in Peshawar, in all Pakistani cities. If we have thirty days in a month, we have more than 100 martyrs every month. And they are being killed by the Saudi support. Saudi Arabia is supporting those who are behind these attacks,” Shirazi stated.

The cleric went on to say that some Pakistani officials have been practicing policies favored by Riyadh for their own personal gains.

Thousands of Pakistanis have lost their lives in terrorist attacks in recent years across the country. Terrorists target Muslim communities, especially Shia population.

About 400 Shia Muslims, including many professors, doctors and schoolchildren, were slain in 2013 in Pakistan, and dozens have been killed since the beginning of 2014, Human Rights Watch says.

According to former Pakistani Interior Minister Rehman Malik, the anti-Shia terrorist group Lashkar-e-Jhangvi, which is reportedly sponsored by Saudi Arabia, has been involved in 80 percent of terrorist incidents in the country.

Last month, a top Malaysian Sunni cleric said a plot involving the United States, Israel and Saudi Arabia had been hatched to cause sectarian conflict among Muslims.

“Saudi Arabia has been influenced by a US and European political game,” Abdul Hadi Awang told Press TV on January 18.

“The Saudis and other Arab countries have turned their lands into Western bases. They do this not to support Islam but to gain power,” added Awang, who is the president of the Parti Islam SeMalaysia, an Islamic political party in Malaysia.

“This makes us (feel) sorry that the Saudi government has been made to serve Israeli and Western interests,” he stated.