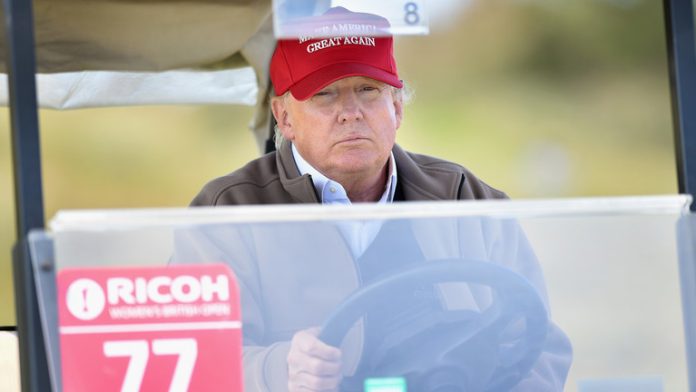 Former US President Donald Trump has been asked by relatives of those killed in the September 11, 2001 attacks in New York City to cancel the upcoming Saudi-backed LIV golf tournament, which is scheduled to take place at his Bedminster golf resort in New Jersey later this month.

The group ‘9/11 Justice,’ in a letter to Trump dated this past Sunday, asked Trump to cancel the event, which was scheduled to begin on July 29, and noted that Trump had previously stated that Saudi Arabia was responsible for the terror attacks, which killed just under 3,000 people – as well as many more in the years since due to health conditions caused by it.

“We simply cannot understand how you could agree to accept money from the Kingdom of Saudi Arabia’s golf league to host their tournament at your golf course, especially in the shadows of Ground Zero in New Jersey, which lost over 700 residents in the attacks,” the group wrote.

“We find it incomprehensible that a former president of the United States would disregard our loved ones for personal financial gain.” We sincerely hope that you will reconsider your business relationship with the Saudi Golf League and agree to meet with us.”

Trump’s claim to Fox News in 2016 that Saudi Arabia was ultimately responsible for the most significant terrorist attack on US soil was central to their argument.

READ ALSO: Male-Male Sex Behind Most Recent Surge in Monkeypox; It’s Linked to Two Raves in Europe – WHO

Osama bin Laden, the alleged mastermind of the attack, as well as several of the plan hijackers, were born in Saudi Arabia.

According to Brett Eagleson, president of 9/11 Justice, neither Trump nor his representatives have responded to the letter, and Trump is “allowing the Saudis to literally get away with murder if this golf tournament is allowed to proceed.”

“It just sends the message that you can make people forget about anything with the right amount of money,” he added.

“If anyone knows the extent of Saudi involvement in 9/11, it is Trump.”