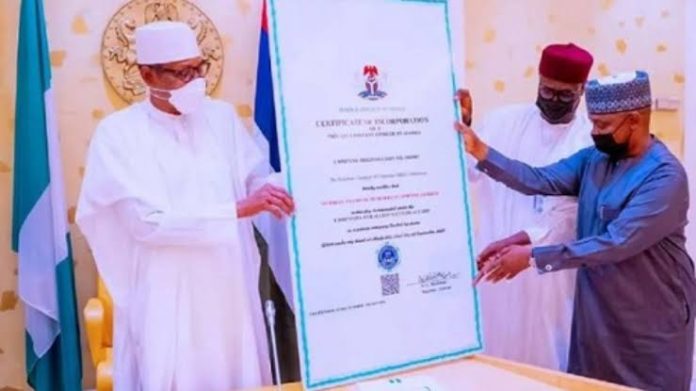 The Conference of Nigeria Political Parties (CNPP) has stated that President Muhammadu Buhari’s unveiling of the new NNPC Limited amounts to rebranding and reinforcing corruption by the President without considering the impact of the action on the Buhari administration’s anti-corruption posture in the eyes of the international community.

In response to President Buhari’s newly unveiled commercial brand in Abuja, the CNPP stated in a statement signed by its Secretary General, Chief Willy Ezugwu, that “the time has come for countrymen and women to tell those managing the upstream and downstream sectors of Nigeria’s oil and gas industry the truth.”

According to the CNPP, while citizens are groaning under the pressure of adverse economic conditions, the NNPC, which has no other serious business except importing petrol into the country to service its subsidy scam, has raised the pump price of fuel yet again.

“It is difficult to understand the reason for presenting the NNPC Limited as a commercially driven company,” said the CNPP.

“It is instructive to note that the NNPC has a history of not remitting revenue to the federation account, and there have been allegations that management has been engaged in backdoor crude swap as part of the corporation’s subsidy scam over the years.”

“Now that the NNPP is no longer subject to Treasury Single Account (TSA) and other restrictions, what happens to the unremitted funds?”

“Because the NNPC is no longer the Nigerian National Petroleum Corporation, but the Nigerian National Petroleum Company Limited, and the same Mallam Mele Kyari is now transitioning from Group Managing Director (GMD) of the old corrupt NNPC to Group Chief Executive Officer (GCEO) in a government controlled company, it amounts to rebranding and reinforcing corruption.”

“Why has the NNPC not resolved the country’s fuel scarcity?” Why has Mallam Mele Kyari’s NNPC preferred to import billions of dollars’ worth of fuel rather than build at least one refinery since he took office?

“It is because they benefit in many ways as supervisors of the NNPC subsidy scam that has been going on even before President Muhammadu Buhari took office as President of Nigeria.”

“How can President Muhammadu Buhari, a crusader against corruption, be forced to unveil a rebranded den of unresolved multiple corruption?”

“How can we as a people and a country celebrate such a negative achievement?”

“If Mr. President wants the new NNPC to work, he must fire all of the old NNPC’s management, order a thorough investigation into all unresolved allegations against the old NNPC’s Group Managing Director and his management team, then appoint fresh hands and relaunch the NNPC Limited.”

“Without this, all efforts at incorporating a NNPC Limited without first cleaning up the old NNPC amount to Mr. President rebranding and reinforcing corruption without realizing the impact of the action on his administration’s anti-corruption posture in the eyes of the international community,” the CNPP stated.