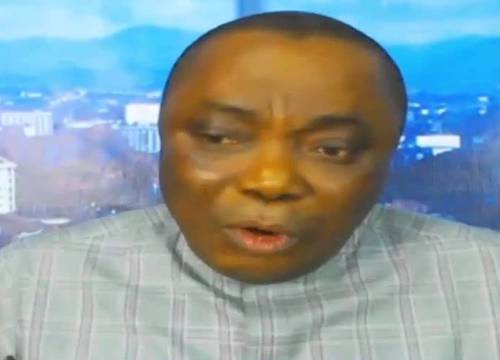 Mr. Nwaoboshi moved to amend the Act pertaining to the Code of Conduct Bureau in an attempt to take the bureau and its tribunal away from the office of the Secretary to the Federation and put it under the supervision of the National Assembly. The senator’s amendment also sought to make it impossible for the Code of Conduct Tribunal to conduct criminal trials

Mr. Nwaoboshi’s grouse arose from the ongoing trial of Senate President Bukola Saraki before the Code of Conduct Tribunal for false declaration of assets. The senator’s bill passed a first and second reading within a week and is now with the Judiciary Committee led by Senator David Umaru of Niger State.

An investigation by SaharaReporters revealed that Mr. Nwaoboshi, who is a lawyer, appear to be acting out of self-interest rather than a desire to help Mr. Saraki. A political source close who used to be close to the first time senator told our correspondent that Mr. Nwaobosi was likely motivated by two factors in his goal of weakening the Code of Conduct Bureau and Tribunal. According to this source, one factor is the senator’s closeness to former Governor James Ibori of Delta State who is currently serving jail time for corruption in the UK. The source said Mr. Nwaobosi, who served as political adviser to Mr. Ibori, makes frequent trips to the UK to visit his former boss in prison. Mr. Ibori was instrumental in securing the senatorial ticket of the People’s Democratic Party (PDP) for Mr. Nwaoboshi. Ibori and Saraki close friends.

The second motivation for Mr. Nwaoboshi is self-preservation, our source disclosed. He revealed that the senator bought the “Guinea House” located on 27 Marine Road, Apapa, Lagos State. The property, formerly owned by the Delta State government, was sold to the senator in 2015 in a shady deal between him and then Governor Emmanuel Uduaghan. The source revealed that the building, worth N10 billion, was sold to the senator for less than N500 million. Even so, accountants in the state are yet to find evidence on state financial records that Senator Nwaoboshi ever paid for Guinea House.

According to the source, Mr. Uduaghan sold several choice properties owned by the state government to Mr. Nwaoboshi and several other cronies.

Another senator told SaharaReporters that Mr. Nwaoboshi knew that the ostensible amendment could not help Mr. Saraki. “He is aware that this legislative body [the Senate] cannot act upon laws retroactively. He is also aware that the particular portion of the Act that requires that the CCB must invite a person accused of false assets declaration was expunged from the 1999 constitution. Even if Dr. Saraki had been invited, the fact that the recent Panama papers revealed that he lied under oath has even complicated his case,” said the senator. He added: “Apart from the false declaration of assets and anticipatory declaration of assets, he [Mr. Saraki] also committed perjury because he knowingly and falsely swore to an oath while filing his assets declaration forms at the CCB.”

The source who used to be a political associate of Senator Nwaoboshi insisted that the senator’s main motivation for going after the Code of Conduct Tribunal was to save himself from possible prosecution for failing to declare the Guinea House property in his assets declaration forms as required by law. He added that there was already a petition against Senator Nwaobosi that is before the Economic and Financial Crimes Commission (EFCC).

The senator seemed determined to aggressively fight the CCT and the laws governing its operations before they get to him, our source stated.