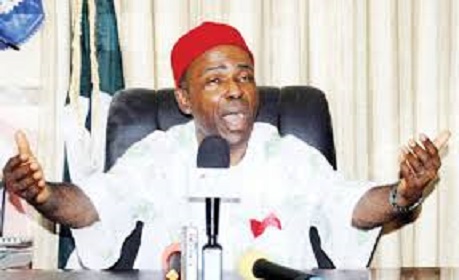 It is with deep sense of regret that the leadership of Igbo Mandate Congress (IMC) received reports of massive gang-up against Chief Dr Ogbonnaya Onu, President Buhari’s preferred choice for the position of the Secretary to the Government of the Federation (SGF) by some elements within APC and opposition PDP.

Igbo Mandate Congress have followed the relationship between President Muhammadu Buhari and the leaders of the All Progressive Congress (APC) in the South East notable among whom is Chief Dr Ogbonnaya Onu, Senator Chris Ngige and Chief Rochas Okorocha, and we have it on good records that the incumbent President has respect for the trio.

The level of mudslinging, blackmail and campaign of calumny and gang-up against Chief Ogbonnaya Onu of recent has attracted the attention of IMC. Information reaching us has outlined those campaigning against Ogbonnaya Onu’s candidacy for the post of SGF as including;

2. Chief Dave Umahi, Governor of Ebonyi State who believes that an Ogbonnaya Onu as SGF from Ebonyi State will dwindle the political fortunes of the PDP in the next dispensation.

3. Senator Anyim Pius Anyim, Nigeria’s immediate past SGF who was not able to make even his principal, Goodluck Jonathan execute any tangible project in the South East for the four years he was in office. The 2nd Niger Bridge and Enugu International Airport being ‘419’ on the Igbo Nation. This man believes that Onu’s influence will whittle down his own influence in the State.

4. Chief Ike Ekwweremadu, Deputy Senate President, who is being pressurized to join the blackmail Ogbonnaya Onu campaign, so as to maintain the supremacy of the PDP in the Enugu-Ebonyi Stateaxis

5. Chief Rotimi Amechi, who is cashing in on the division within the South East, to position himself for the plum appointment.
Igbo Mandate Congress wishes to note that these men have contributed in one way or the other to move Nigeria forward.

1. Chief Rochas Okorocha had the foresight to drag a faction of the All Progressive Grand Alliance (APGA) into the Buhari-Tinubu alliance

2. Chief Dave Umahi, despite all odds, have proved from the Ebonyi State example, that a victimized Deputy Governor can defeat the candidate of a sitting governor, and emerge as a State Chief Executive-a feat not lost on lovers of democracy

3. Chief Anyim Pius Anyim, who through the act of God, benefitted from our protests after the 2011 elections, that Igbo be made Senate President which ex-President Jonathan compensated with an SGF slot.

4. Chief Ike Ekweremmadu, who through another act of God, secured a slot for the Igbo race in the 5th National Assembly, despite being in the opposition PDP

5. Chief Rotimi Amechi, who refused Presidential impunity in Rivers State and set stage for a Southern platform of ‘Change’.

Igbo Mandate Congress believes that Chief Ogbonnaya Onu, a former National Chairman of All Nigeria Peoples Party (ANPP), and a consistent member of the opposition since 1999 is ably qualified for the position. This Ebonyi State born former governor was part of those who helped form a coalition that led to the formation of the APC. He also helped some Igbos in the north to remain and cast votes for the opposition.

Igbo Mandate Congress believes that anybody can pursue his political ambition of being the SGF, and believes that Senator Chris Ngige and Prof Anthony Anwuka and indeed others are not inferior choices but ganging up against a particular person and putting undue pressures on the person of President Muhammadu Buhari to jettison his preferred choice, using instruments of blackmail, is not in the best interest of the Igbo race.

Igbo Mandate Congress is known worldwide as a stakeholder in the ‘Change’ being celebrated in Nigeria today, and participated in ensuring that Igbos in the North rejected some directives form Ohanaeze and compromised Igbo Leaders to vote for the expired “Transformational Agenda” in concert with Ohanaeze Ndigbo in the 19 Northern States and as such has the moral right to call erring leaders t order.

Igbos in the APC should pursue their ambitions without puling down others. They should promote their preferred candidate without rubbishing the efforts of others. Let this mudslinging politics stop for once.

We have reliable information that President Buhari is wearied of all these recurring Igbo antics and may cede the position to another zone if the pressure becomes overbearing.

That was the nonsense that made Igbo produces five Senate Presidents in eight years while another zone (North Central) produced one senate President in eight years. Those misguided Igbo leaders must carefully avoid a situation whereby President Muhammadu Buhari wearied by scandalous lobbying cedes the coveted SGF position to another zone.In the event that President Buhari cedes this position to another zone, and cries of marginalization starts, IMC will reveal all the details of the self inflicted calamities and hold the players responsible. They must not gang up with the PDP to pull down Chief Ogboinnaya Onu before Buhari to become SGF or anything they wish.