The usual AFP French media has begun to promote the latest version and impostor of late Abubakar Shekau.

Shekau III is here. The original Shekau was killed in July of 2013. The next Shekau was killed in September in a Konduga battle. However the group loves to keep the Shekau brand immortal and replaces the figure with any bearded men who can act crazy when dosed with heroin.

Like “Emir,” “Shekau” is a mere title now used by whoever assumes leadership of the richly paying, French connected psycho terrorist group which has most leaders sent from the French neighboring countries, Cameroon, Chad and Niger.

The problem is that the international media and most especially French media is suspiciously aiding these poor attempts at fooling the members most especially, by promoting his fake replacements.

The image released of the latest video shows a really funny looking guy. His facial features from the still images are very distinct and quite funny. Shekau III did not have his characteristic Ihejirika given armored tanks and APCs as Shekau II was caught and died in these. Even the men who stood beside him this time were very different and most of Shekau II’s commanders died with him at Konduga.

More importantly, than the fake new Shekau. In the Boko Haram latest release, they had a picture of a terrorist standing on what appeared to be a piece of Nigeria’s missing air force Alpha jet, and claimed to have shot it down according to the not yet publicly released video in the hands of their French publicists. This is of concern. Perhaps they did not shoot down the plane but only found the parts before the Nigerian military did.

Pictures of fake and dead Shekaus 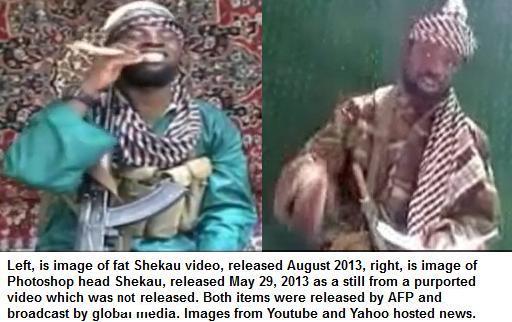