Bayelsa Senator Ben Murray Bruce has come to be known for one thing in the social-media world- hypocrisy.

He recently made headlines for touting that he does not fly first-class, then being caught flying business in Arik Airlines  class which is the equivalent of first-class, only difference is semantics.

The Bayelsa Senator who lately promoted a Buy Nigeria concept initiated three days earlier in a Press release from NewsRescue of the #Made In Nigeria revolution launch by one of our authors, has been slammed once again for having printed his recent “commonsense revolution” book in the USA, while Nigeria has tons of reliable printing companies.

His #BuyNaijaToSaveTheNaira campaign has similarly been criticized as a subvert campaign by him and Bukola Saraki to promote Innoson motors in which they have vested interests; as the campaign has left other small producers on the curb. The senator was seen sporting foreign jeans and a foreign shirt while he took delivery of his Innoson motor gift.

Buy Naija To Save The Naira. Guess the message is clear: Don’t Buy The Book! 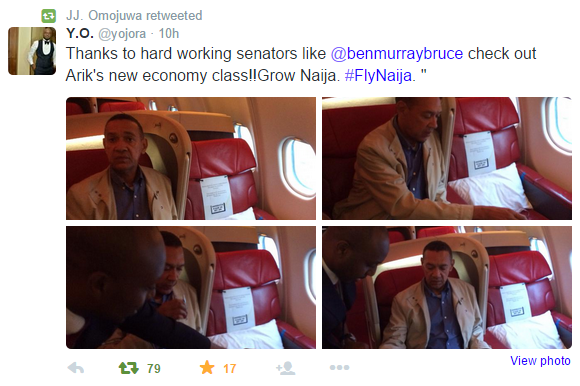