Some Details From Audit Report Indicting Ex-Generals Of Usurping Billions 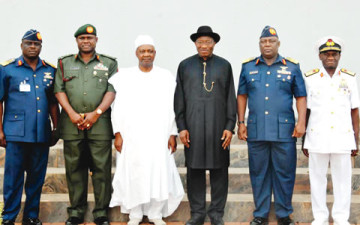 SaharaReporters has exclusively obtained a copy of the audit report that detailed apparent extensive fraud in the procurement of equipment for the Nigerian military, and triggered President Muhammadu Buhari’s order to the Economic and Financial Crimes Commission (EFCC) to investigate the role played by several retired and serving officers as well as civilian contractors.

The audit committee began its work at the end of August 2015, and looked at procurement of weapons and equipment for the period from 2007 to 2015. According to the confidential report, the committee examined documents and information provided by several ministries, departments and agencies. It also analyzed information it gathered from organizations that provided funds in local or foreign currencies to the Office of the National Security Adviser (ONSA), the Defense Headquarters, and the various arms of Nigeria’s military services.

According to the report, the committee examined more than N643.8 billion in local currency contributions to defense expenditure, with the foreign currency component topping $2 billion. The audit committee disclosed that their collation of defense funds did not “include grants from State Governments and funds collected by the DSS [Department of State Services] and [the] police.”

The audit report noted that, “in spite of this huge financial intervention, there has not been significant improvement in the capacity and capability of the Armed Forces.”

​The committee revealed that it had substantially covered the audit of procurement activities by the Nigerian Air Force (NAF) and ONSA, but those of the Ministry of Defense (MOD), DHQ, Nigerian Army (NA) and Nigerian Navy (NN) were ongoing.

“The procurement activities funded by ONSA were wide ranging and included acquisitions of platforms, weapons, ammunition and equipment,” the audit committee stated in its damning report. It continued: “Most of the ONSA-funded contracts were awarded to Messrs Societe D’ Equipmente Internationaux (SEI) Nigeria Limited and E-Force Interservices Nigeria Limited,” the audit stated. According to the audit report, ​ between February 2014 and May 2015, SEI “handled 38 ONSA funded contracts. Twenty-eight of the contracts were for the NA while 10 were for the NAF. However, the Committee could only establish the cost of three of the NA contracts amounting to nine hundred and twenty-nine million, five hundred and thirty-five thousand US Dollars ($929,535,000.00). The total cost for the 10 NAF contracts was nine hundred and thirty million, five hundred thousand, six hundred and ninety US Dollars ($930,500,690.00). Thus, a total cost of one billion, eight hundred and sixty million, thirty-five thousand, six hundred and ninety US Dollars ($1,860,035,690.00) was expended by the ONSA to fund the NA and NAF contracts.”

One of the numerous anomalies reported by the audit committee was the absence of cost of defense items in the NAF letters awarding the contracts. “Rather, the vendors’ invoices that were all issued on the same date (March, 19 2015) reflected such details. Additionally, some of the award letters contained misleading delivery dates that indicated fraudulent intention in the award process. The observed discrepancies are in clear contravention of extant procurement regulations.”

The committee disclosed that its members had yet to physically inspect the procured equipment, adding that it “thus cannot confirm their delivery or serviceability status.” In particular, the committee “particularly noted the issue of procurement of two Mi-24 helicopters through SEI Nigeria Ltd that were deployed to the North East Operations in unserviceable condition which resulted in the unfortunate death of [the] late Group Captain U.N. Akpan and Master Warrant Officer Zabesan H.”

One of the contracts highlighted by the audit was one for $520 million awarded by the ONSA to E-Force Nigeria Ltd in February 2014 for the supply of 12 combat helicopters, rocket launchers and the training of Special Forces. The audit found out that the Central Bank of Nigeria (CBN), on the orders of the ONSA, had mobilized E-Force Nigeria Ltd with $146 million after the contracts were signed. Even so, the NAF “has emphatically denied knowledge of the procurement or delivery of the helicopters to the Service,” the audit stated. It added that the Army “did not reflect the procurement of the rocket launchers in its submission to the Committee.”

The audit committee also highlighted the questionable procurement of four Alpha-Jets in July 2014. It revealed that the ONSA awarded a contract of more than $7 million to Messrs Abbatare Nigeria Ltd, Konet Limited and Air USA for the procurement of the jets, including weaponization, avionics upgrade and provision of spares for the NAF. But the audit discovered that the jets were procured on an “as is” basis through Mr. Uptal Nandy, a UK-based Indian veterinary doctor. “As is,” “where is” meant that the equipment would be supplied in its present condition “and the seller was not obliged to carry out any repairs or maintenance on the aircraft.”
According to the audit, Nigerian Air Force personnel “confirmed that only two of the aircraft were ferried to Nigeria in Apr 2015 after cannibalization of engines from NAF fleet.” It added that the remaining two Alpha-jets were “still in the USA awaiting repairs and clearance from the USA State Department.”

The audit uncovered a series of suspicious transfers of funds through the CBN. The committee stated that, between September 17, 2012 and March 9, 2015, former National Security Adviser, retired Colonel Sambo Dasuki, and ONSA’s former Director of Finance and Administration, Mr. S.A. Salisu, ordered the CBN to transfer various sums of money totaling more than €9.9 million. The funds were transferred to “various accounts in Nigeria, Niger Republic and UK for unascertained purposes.”

As the North Tilts Towards a Precipice, ...