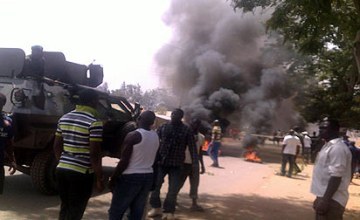 No fewer than four persons were feared killed and over 40 houses razed down in the early hours of Tuesday in a bloody crisis that erupted between the Ijaws and the Itsekiris in Warri North Local Government Area of Delta state.

The crisis, our correspondent reliably gathered, is connected with who occupies the position of the council chairman, which has always been enjoyed by the Itsekiris.  The Egbema Ijaws are now insisting that it is their turn to produce the next chairman.

Impecable sources in the LGA disclosed that several Itsekiri villages, including Gbokoda, Udo, Ajamita, Obaghoro and Ayerode-Zion on the Benin river axis, were razed down.

Although the number of persons killed could not be ascertained as of the time of this story, some sources said at least four persons were known to have died in the violence.  One other person was seriously injured and was said to be receiving treatment at a hospital in Sapele, while Itsekiris and Ijaws from neighbouring communities were said to have fled their communities for fear of being attacked.

Yesterday’s invasion of the Itsekiri communities is reminiscent of the fratricidal war between Ijaw and Itsekiri ethnic nationalities between 1997 and 2001.

Speaking with SaharaReporters, an Itsekiri who pleaded anonymity said, “The Ijaw had demanded that the chairmanship position of the council be allocated to them if peace must reign in the area. We have six electoral wards in the council and before now we have always produced the chairman while the Ijaw that have four electoral wards take the position of the vice-chairman.

“But sometime ago the Ijaw protested against the whole arrangement that this was no longer acceptable to them and unless they occupy the chairmanship position heads will roll. This same Ijaw also protested against the population figure produced by the National Population Commission (NPC) as well as wards delineation done by the Independent National Electoral Commission, INEC that gave us the Itsekiri the upper hand over them. The Ijaws till date have regarded that exercise as fraudulent.”

As of the time of this report, the Commanding Officer of the Joint Task Force codenamed Operation Pulo Shield, had relocated to the troubled areas to maintain law and order and prevent any escalation of the crisis to other parts of the state.

A source at the police headquarters in Asaba told our correspondent that the Commissioner of Police, Mr. Ikechukwu Adaba, invited some Ijaw and Itsekiri leaders to his office yesterday to deliberate on how to nip the crisis in the bud and find a lasting solution to it.

It was gathered that following a briefing on the incident, Governor Uduaghan directed security agents to fish out those behind the violence, warning that he would not fold his arms and allow some disgruntled elements to truncate his peace and security agenda.

Condemning the action, Ijaw elder statesman and Egbema leader, Chief Emma Ebimami, stated that following the leadership tussle in Itsekiri communities, some aggrieved Itsekiri youths could have invited the Ijaw youths to come to their assistance.  He called for a thoroughly investigation of the matter, stressing that those found wanting should be made to face the music.