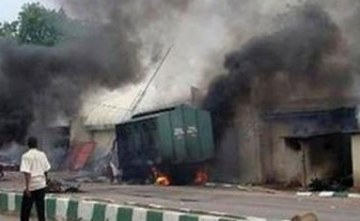 NewsRescue- Suicide bombers made an attempt on the life of the Shehu of Borno, Umar Garbai el-Kanemi on Friday after mosque.

The bombing attack left 5 of his security entourage dead. It will be recalled that last year, Boko Haram promised to deal with rulers of Borno and on May 31st, 2011, gunmen suspected to be its members shot dead Abbah Anas, the younger brother of the Shehu of Borno. The gunmen had stormed his house at about 9pm, killing the Shehu’s brother, Abbah, 30, a senior officer of the Nigeria Civil Defence Corps (NCDC), in his home in the Gangamari area of Maiduguri.

Northern leaders have been under extreme threat and risk from the Boko Haram menace confraternity of ultra extremists. Nigeria’s security services have so far failed to deal with the senseless menace.