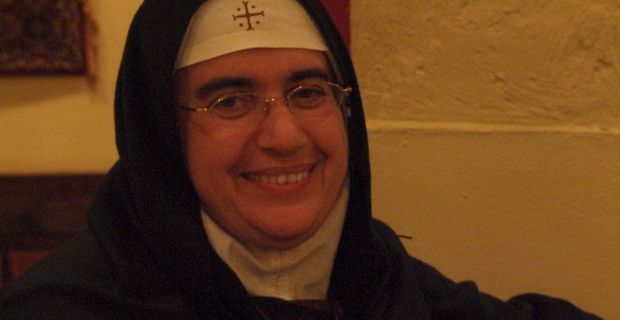 The International Institute for Peace, Justice and Human Rights (ISTEAMS) has just published a comprehensive report on the chemical attack in the Damascus suburb of East Ghouta. The document is called The Chemical Attacks on East Ghouta to Justify Military Right to Protect Intervention in Syria. With video clips and the evidence provided by witnesses to support the conclusions, the report has been submitted to the United Nations Human Rights Council and spread among foreign diplomats.

The author is ISTEAMS President and International Coordinator Mother Agnes Mariam of the Cross (el-Salib), the Mother Superior of the Monastery of St. James the Mutilated (Syria). A fearless faithful, she has been collecting the evidence related to bloody events in the conflict zone since the very start of Syrian rebellion: the militants running rampant, the staged fakes and instances of one-sided highlighting of the events in Syria by Western media…

The study of 35 videos posted on the Internet has made surface multiple disparities and brought into light the methods used to manipulate the public opinion. The clips showing hundreds of dead and suffocating victims, including scores of children suffering as a result of chemical weapons attack by government troops, had been prepared previously before the incident took place in order to justify a foreign intervention against Syria. The report offers the following fundamental conclusions:

Actually there were no local residents at the time of attack in the area of East Ghouta, the place chosen for staging the provocation. The majority of population had left East Ghouta before the combat actions started. The ones left were only a few elders and some «supporters of «rebels» – predominantly adolescent and grown-ups. The victims’ dead bodies mainly belong to the people from various places situated far away from East Ghouta; some of them have been identified by relatives.

Many videos have fictional character or, to put it plainly, are obvious fakes with the dead bodies of people who were killed, kidnapped and missing as a result of the «rebels» attack against 11 Alawite villages in Latakia on August 3, 2013 (back then over 150 women and children were kidnapped to be exchanged for militants kept behind bars in Syrian jails, the authors of the report adduce the detailed list of already identified victims and the missing persons, they point out that the list contains 400 names, so, at present, it is far from being full). Here are the examples of staged incidents:

a) Scripted events of deaths and aid provided to victims. Two video clips presented by Jobar Revolutionary Coordination Committee and Revolutionary Committee of Hamouria, show contradicting pictures of the same adolescent dying in different footages. In some places the picture shows the very same child receiving emergency aid over and over again and each time it’s done in a different way. The authors of the report and experts say it looks very much like a scripted footage when the very same picture is shot many times.

b) Demonstration of victims’ bodies and their burial. Having announced the death toll was 1465, the «rebels» (this lie has been repeated many times by US top officials) could produce the evidence of only 8 burials. The bodies mainly belong to children, few victims are adults, and there are almost no women among the dead while the East Ghouta joint medical staff reported that many corpses were female.

c) Demonstration of extremely strange instances when persons were transported in space, the same dead bodies shown over and over again in different footages. For instance, the same woman, who was allegedly looking for her children, somehow managed to be present in five video clips shot at different places at the same time, she also found two of the children, and, somehow, did it in two different places as well. Another clip showed the chemical attack victims in Jobar, the children shown in the video appear as victims again, but this time in the place called Kfar-Batna, the third video clip shows the very same children as victims in Ain Terma…

There are other instances of outright lies and fakes that can easily be exposed. For instance, the falsifiers used photos and videos which were broadcast as photographic evidence of the death of the Ghouta residents early on in the immediate aftermath of the attacks and the propaganda push that followed it. The ISTEAMS report points out, however, that these photos and videos were not taken in Ghouta or even in Syria at all, but that they were actually photos taken in Cairo, Egypt, during the riots. The other example is a witness shown describing how his family smelled the poisonous gas sarin. This is a lie because sarin has no smell (the very same way the majority of poisonous substances – chemical agents used for war purposes – produce no smell).

The 50-page report of the International Institute for Peace, Justice and Human Rights is another evidence of the irrefutable fact that, according to Russian Foreign Affairs Minister Sergey Lavrov, «We have plenty of reports on chemical weapons use, which indicate that the opposition regularly resorts to provocations in order to trigger strikes and intervention against Syria», he said. «There’s a lot of data. It’s widely available on the internet. This data is presented in the report, which our experts put together in association with the use of chemical weapons in Aleppo in March this year. There’s also plenty of data on the incidents that occurred in August in Ghouta, near Damascus» —Strategic reports

Since when does a human rights organization take to arguing the case for a military attack that will kill scores of innocent civilians? If you are Human Rights Watch, it’s all in a day’s work. The US regime’s favorite “human rights ” organization, which once praised the Obama Administration’s continuation of its predecessor’s torturous CIA “extraordinary rendition” program, pulled out all stops to bolster Obama’s claims that the Syrian government was responsible for the August 21st chemical attack near Damascus.

As Obama was ready to teach Syria a lesson via Tomahawk cruise missiles, Human Rights Watch stood virtually alone in the world on the president’s side. The human rights group was not busy trying to help the victims or promote international diplomatic efforts to end the crisis. They were instead feverishly engaged in a convoluted effort to prove that the missiles that purportedly carried the poison gas could only have come from Syrian government positions. They had no investigators on the ground, yet they determined independent of facts that the Syrian government must have been responsible. This is the job for a human rights group? To help a president make the case for war?

Human Rights Watch even repeated the lie that the UN inspectors’ report on the August 21 incident “points clearly to Syrian government responsibility for the attack.” It does no such thing, and in fact the UN had no mandate to determine responsibility for the incident. But this was the US administration’s line and HRW was determined to repeat it — even as the rest of the world gasped in disbelief.

When the Russian effort to head off a US attack on Syria — which would no doubt have killed far more than it was claimed were killed by poison gas on August 21 — was finalized by a UN resolution providing for the destruction of the Syrian government’s chemical weapons and facilities, one would think a human rights group would cheer that diplomacy triumphed over war. No so Human Rights Watch. The organization’s UN representative Philippe Bolopion blasted the agreement, stating that it “fails to ensure justice.”

At that point, even President Obama was happy to have avoided a military conflict in Syria. Not Human Rights Watch.

The organization has not let up, however. A recent report by Mother Agnes Mariam of the Cross and her Institute for Peace, Justice and Human Rights painstakingly refutes much of the photographic evidence presented of the attack. Being on the ground in Syria, she has also interviewed scores of victims of the insurgents’ attacks. Her organization’s report raises serious questions about whether the YouTube videos presented by the US government as the main US evidence of Syria government responsibility for the attack was manipulated or even entirely faked. Mother Agnes Mariam, dubbed by the BBC as “Syria’s Detective Nun,” finds her work attacked in a recent BBC article by…you guessed it, Human Rights Watch!

Peter Bouckaert, “emergencies director” of Human Rights Watch, who is not on the ground in Syria, brushes off Mother Agnes Mariam’s work, stating flatly that “there’s just no basis for the claims.” He continues that, “she is not a professional video forensic analyst.” Of course she never claimed to be. What she claimed is to have working eyes, which noticed — among other anomalies –  that several of the purported victims of the attack were seen at several different locations at supposedly the same time and that it does not take a “professional video forensic analyst” to recognize that is impossible.

Human Rights Watch is a protected, pro-US regime NGO. They want to be the only voice on human rights issues and thanks to their favored status and enormous budget they have much weight on these issues. But how many times can they promote torture and war before people stop listening to their lies?