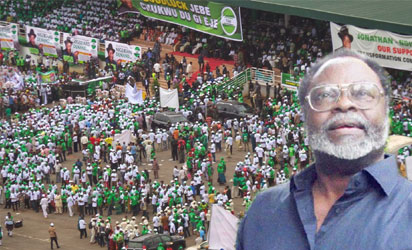 My attention was drawn to the above news item in the Vanguard Newspaper of 23/03/2016 and the first thing that I did was to go to the website of the group that organized the summit “Coalition of Civil Society Organizations on Human Rights and Interfaith Religious Organizations for Peace” and check their past activities. What I saw shocked me as this group does not have any past activities! The message I saw under “Past Activities” was “Page under construction please check again”.

This means that this group is a sponsored faceless mushroom group that do not have any past activities to show and was used as a platform to stage this sponsored “summit” by those who masterminded and perpetrated the brutal Zaria Massacre that killed close to one thousand defenseless & unarmed Nigerians in Zaria and buried them in mass graves to bury the evidences.

This is the fourth group so far sponsored by the Nigerian government since after the brutal Zaria Massacre in its smear campaigns of calumny and demonization against the peaceful Islamic Movement of Nigeria (IMN) under the leadership of Sheikh Ibraheem Zakzaky.

It is important to note that all the so-called “Resource persons” of this “summit” were Christians and that was deliberately done to make it look like the smear campaigns of calumny against IMN has a “national spread”. If for example Wahhabi speakers asked the Nigerian government to impose travel ban on Iran, that will be very glaring to Nigerians so the war criminals who perpetrated the brutal slaughter in Zaria decided to use Christians of questionable characters to stage the sponsored “summit”.

The first “Resource person”, Mr. Ayokunle Fagbemi, is a drifter that does not have any past history of defending human rights or organizing any Interfaith Religious dialogue in Nigeria. And the second “Resource person” Udenta O. Udenta was the director of communication and strategy of the notorious and much hated Jonathan – sponsored Transformation Ambassadors of Nigeria (TAN) that all Nigerians knew was a monumental fraud. Udenta O. Udenta who is jobless presently will need such venture like sponsored “summit” to get some fast money.

One of the “Resource person” Mr. Ayokunle Fagbemi said: “Thankfully, the Chief of Army Staff was of the same faith as the Shiites, the trouble would have been difficult. No group on its own would accept (admit) extremism on its own.” The Northern civilian – military cabal that executed the brutal Zaria Massacre are mostly die-hard Wahhabis/Salafis who have a global genocidal agenda against Shia Muslims. And if we consider AlQaeda as the version 1.0 then ISIS is version 2.0 then the brutal Zaria massacre by the Nigerian Army is version 3.0 as the extreme savagery and barbarism displayed by the Nigerian Army far exceeded the crimes and atrocities of these mentioned murderous terrorist groups.

It was in the communiqué issued at the end of the sponsored “summit” that they advocated travel ban on Iran so as to prevent Nigerians from studying in Iranian institutions and seminary schools. The history of Iranian seminary institutions where Scholars are groomed is glorious and do not have a single record of producing violent terrorists. There are students from more than 120 countries of the world that are currently undergoing various courses in those schools.

Finally, the organizers behind this “summit” are the same with the organizers of the three past anti-IMN campaingns and they have one goal which is they want Nigerians to forget that they slaughtered close to one thousand defenseless Nigerians in Zaria and buried them in mass graves to serve an evil foreign agenda that will never benefit the Nigerian nation. And they want to make Iran as a scapegoat to their crimes of genocide against the peaceful Nigerian Shia Muslims.