“Asasi” is a Yoruba word for one who is under a spell to commit grievous error against himself or who is under a fetish attack to misbehave and bring unto himself public disgrace. The name AZAZI, is sure to mean something noble in Ijaw language. But the events of the last few weeks seem to suggest that General Owoye Azazi, the National Security Adviser, NSA may indeed be under a spell to undo himself and bring his principal to unfathomable ridicule.

Related: NewsRescue- Poverty and Politics are the cause of Boko terror: Nigeria NSA, Gen. Owoeye Azazi

Not many people in Nigeria today believe that AzAzi has discharged his duties creditably owing to the escalation of security challenges in the country during his tenure. Many believe that but for the issue of cronyism, which has been the hall mark of the Jonathan’s recruitment of his top aides, Azazi had no visible experience profile to coordinate security intelligence in a democratic setting.

For starters, AzAzi a career Military man worked in the military intelligence at a time all they did was to sniff around for who was plotting a coup among the military officers.They were more useful in ferreting civilian accomplices to coup plotters or insurgency issues against the military. He later became Chief of army staff and later Chief of Defence staff, both military based assignments which restrict appointees to military duties.

The appointment of Azazi as Chief of Army staff by President Obasanjo coincided with the period when the Niger Delta militants held the nation at the jugular. Obasanjo therefore elevated the Niger Delta son to the top army position to undercut the militants who either had to fight their own or simmer down and negotiate with their brother who Commanded the state military apparatus.

…must have Bayelsa roots for top jobs

Azazi who was retired by the Yaradua regime was brought back into reckoning by the home boy Jonathan in what has been described in some corners as the “Bayelsanisation ” of state power.

To refresh our memory, under Jonathan, the rule now seems to be that for one to be considered for any powerful appointment you must either be a Bayelsan by birth, or an in-law of Bayelsa or must have worked during your career in Bayelsa. One way or the other trace your way to Bayelsa and pronto you find favour in the eyes of Mr President.

The Chief Executive of Nigeria today is from Bayelsa.

The National Security Adviser who oversees all security organizations operationally in Nigeria and who by deeds and in fact is only answerable to President and his funding and budget is not subject to any legislative oversight or control is a Bayelsan.

The most powerful Nigerian economically, who controls the source of 80% of Nigeria’s wealth by law – Minister of Petroleum resources is a Bayelsan.

Lets look deeper into the security management of Nigeria under Jonathan.

Apart from the NSA, the Chief security officer -CSO of the President is a Bayelsan.

The former IGP Alhaji Hafiz Ringim though from Kano was former Commissioner of Police in Bayelsa.

The Director General of SSS though from Akwa Ibom was former Director SSS in Bayelsa.

Also, the Minister of Police Affairs though from Ekiti was former Military Administrator in Bayelsa State.

And the story is all around that Olubolade only represents Ekiti in name only as all around him is Bayelsa and it is easier to get Olubolade to do anything if a call is made from a Bayelsan.

This writer once observed that “Perhaps this lopsided appointments would not have been a serious issue of concern but for the ineptness and lack of capacity that has been displayed in the security department of Government these past few months. Now people are wondering if this nepotistic selection method of the people managing our security apparatus is not already hurting the nation.” 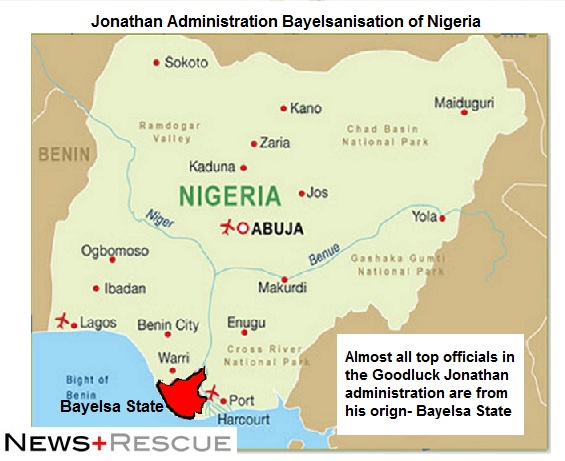 It is against this background that we must situate the gaffe made by General AzAzi when he attempted to pile his seeming ineptitude on the political party that gave his boss, Jonathan, himself and their ethnic group a rare opportunity to be at the helms of affairs. The opposition parties could not have done better than Azazi in the open denigration of the PDP.

The PDP provided the machinery that brought him into reckoning, as the party garnered the votes all over the country for President Jonathan from the South south, South west, South East, North Central, North East and North West. The analysis of AzAzi that the internal party process discriminated against any ethnic group therefore flies in the face of this reality,unless of course Azazi was alluding to a manipulation by Jonathan to arrive at this reality.May be we then must ask Gen Azazi to provide more facts as President Jonathan requested.

Linking the spate of bombings and insecurity of the magnitude we have to party internal squabbles belittles the intelligence capacity of the NSA. And his ability to grapple with the burgeoning problem is therefore suspect. How can the person the whole nation has put it’s security network in his hands display this level of mediocrity in analyzing the problem confronting this nation. That precisely is why the nation is waiting for a better explanation on how Jonathan intends to guarantee the security of lives and property which is the primary responsibility of Government.

Under Azazi, we have seen some level of mediocrity right from the start of of the Boko Haram imbroglio. It was under him that the security agencies messed up the initial arrests of criminals such as the Kabiru Sokoto episode who escaped from custody.

What about the less than professional handling of the rescue efforts of two foreign nationals a Briton and an Italian in the hands of their captors in Kebbi?

It was this same Azazi who threw his hands in despair claiming that the security agencies had no capacity to handle terrorism.Yet year in year out since the Jonathan Presidency first and second coming, the security outfits have enjoyed robust funding from budgetary and non budgetary sources.

So, while Nigerians are still trying to give President Jonathan a benefit of the doubt and allow more time to handle the security mess, then Azazi throws in this statement of passing the buck. At best his reasoning could only have addressed the sublime issue of the political “Boko Haram” which itself is a creation of the security agencies to explain away their incompetence.

Even if there was political Boko Haram, that could be located in the realm of the vituperation’s and unguarded volatile statements of the CPC leadership who made it clear that Nigeria will become ungovernable under Jonathan because it lost the election.

The weaklings in authority have not been able to make the opposition leaders accountable for the statement and the violence that erupted after the elections.

What about the religious extremism driven and criminal Boko Haram for which we seem helpless. Valuable lives and properties have been lost and are being lost on daily basis.

It is no longer news that the criminal Boko Haram has international dimension with Alqaeda. There are best practices and the super powers countries US, UK have done a lot to tame the monster and all we needed was to upgrade our security intelligence.

The bad news out there is that we have a business oriented and political NSA, much less concerned with the job. Ordinarily a serious minded NSA will be seen not heard, his work will be his speech. Here there is a voluble NSA who will let us know that his kinsman is President. And will explain away incompetence with political considerations.

President Jonathan was hard hit that he came out from his shell to indirectly tongue lash his kinsman and then threw the challenge back to Nigerians to ask his NSA what he meant that the PDP constitution and zoning was responsible for Boko Haram. For all we know, the Boko Haram predates Jonathan administration and his battle for the Presidency after the death of Yar”adua. Yet the Zoning related crisis was only an issue in PDP primaries and Presidential election in 2011 election so how can we now hold this responsible for the Boko Haram crisis that started prior to Jonathan Presidency. Is this also responsible for the MEND crisis in Niger Delta.?

So one can see that unless one has been hit by “Asasi” no one who has been given such a huge responsibility as the NSA should trivialize his assignment by politicizing the challenges rather than solving the problem. Every Nigerian is at the risk of avoidable death from bombings and other security related challenges.Government owes us the security of our lives and Property.Jonathan has the responsibility to guarantee us this key duty of Government, but this AZAZI who has been hit by “Asasi” will get us no where.

*Ade Akinmola is Coordinator for African Foundation for Democracy and Policy Initiative (AFDPI).