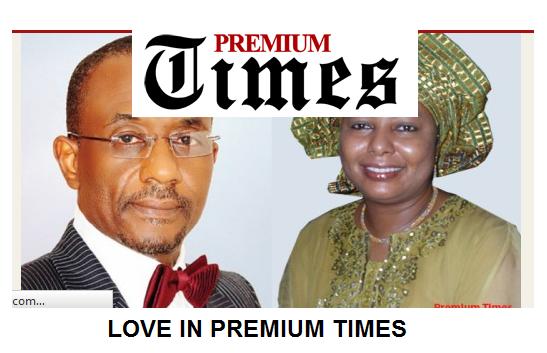 The competition in the Nigerian Blogosphere is stiff – there are so many online blogs and magazines, all struggling to generate traffic and get hits in order to attract adverts – so when I read about the (alleged) Sanusi Affair on Premium Times this morning, I wasn’t quite surprised. However, the sloppily written, poorly investigated piece left me with more questions than answers. Firstly, why on earth would two (married) lovers keep such damaging messages on their phones; and assuming that they were careless enough to throw caution to the wind, would such epic carelessness also not posses them to keep equally incriminating pictures? Why were none published? Whoever had enough time to leak messages must surely have had more than enough access to pictures too.

Taking a leaf from foreign tabloids, when such scandals are exposed to the public, they usually back up the stories with hard, irrefutable evidence, or elicit confessions from one or both parties where this evidence is lacking. The only slightly professional thing that the writer did was to place calls to Mallam Sanusi Lamido and Mrs. Maryam Yaro, and his [alleged] comment – quoted below – sums it all up;

“I have known Dr Yaro since 1981. She was my student in Yola and she later came to ABU Zaria. We have been very good friends but this is not why NIRSAL took her. You may wish to check her CV against all the other CVs in NIRSAL. And she did go through an interview process with the NIRSAL CEO making the decision not CBN HR. As for the personal allegations, this is all strange to me but I have a personal policy of not responding to such allegations since in Nigeria anything can be published on any public officer without proof.  I have limited myself to what concerns official allegations and leave you to your God and your conscience on whatever else you want to publish. Thank you for telling me though.”

With my experience in media, I can say with a good degree of certainty that this is a targeted smear campaign. The writer, however, could have feigned non-existent objectivity and not have made his intentions so obvious from the start.

Anybody privy to their traveling plans could have supplied the necessary dates and proceeded to build a mansion of Hints Magazine-type stories, using these details as the foundation. The whole story is based on purely circumstantial evidence, with not one shred of physical evidence to back it up.

Surely, if they had been so careless with their phones that a third party gained access to their messages, did this mysterious agent copy out their messages, forward them to his (or her) phone, or take screenshots and send them via email, BBM or Bluetooth? If the messages were copied out on a piece of paper, or via ‘copy and paste’, then this case holds no water and could easily be dismissed as cheap blackmail – this would also be the case if the messages were forwarded to the informant’s phone as their original source can not be ascertained (the sender’s phone number also proves nothing, the informant could have had enough time to compose messages using any of their phones). The only substantive evidence that could suffice in this case is a screen munch (several actually), and if either of their phones were tapped, then a case could be made against Premium Times for invasion of privacy.

The only thing that this article confirms, however, is that Sanusi does have superhuman abilities, because unless his eyes are components of a state-of-the-art recording/transmitting device, then I wonder just how the writer of this article was able to determine just what type of dress Mrs. Yar0 allegedly wore when she welcomed her lover to her hotel room; if a camera in the hotel lobby or one conspicuously aimed at her door in the hallway captured this, then could they kindly provide us with a picture? (This would definitely be a small feat for a news outlet resourceful enough to see outfits in private rooms)

This is Nigeria – if Premium Times had any incriminating evidence, they surely would have published it. While accidental media practitioners are best avoided when they choose to slander people, it remains highly imperative for examples to be made of those who refuse to listen to their conscience, those who choose to sacrifice true journalism and deductive reasoning at the alter of sensationalism and blog hits, and who fail to abide by the noble ethos of the wonderful profession that is journalism. I would advise Mrs. Yaro to sue.

Sanusi is a man and our society is essentially a patriarchal one – whoever sponsored this story obviously has a score to settle with the Mallam, but this is Africa where men get away with many things and we know that the effects that this might have on him would be nothing compared to what Mrs. Yaro would most likely go through. An allegation of adultery is not something that a married woman just shrugs off, and whether or not this story is true (I highly doubt that it is, and a true story without facts to back it up is as good as a poorly-narrated tale), she has to take decisive action.

This could either be aimed at destroying the Mallam’s career, or settling a score with Mrs. Yaro; either – or both – of them could be the target. It is not exactly news that many within the CBN are not satisfied with Sanusi and claim that he has not achieved much internally, and this could very well be the handwork of a disgruntled associate (or a group of disgruntled elements).

I do, however, wonder just how that kind of article – with the many broken laws, filled with highly sensational conjecture – made it past a qualified editor. If this is what blogging has reduced journalism to, then I fear for the future of this noble profession in Nigeria.

You may read the article at http://premiumtimesng.com/news/137242-exclusive-sanusi-lamido-his-cbn-mistress-and-their-sweetheart-escapades.html