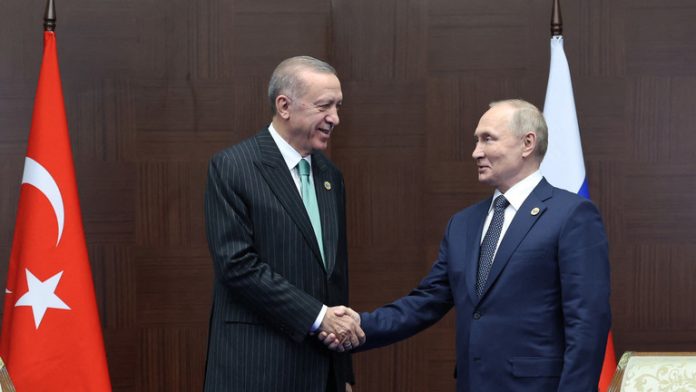 On Thursday, Russian President Vladimir Putin spoke by phone with his Turkish counterpart, Recep Tayyip Erdogan, about the prospects for peace talks with Ukraine.

Putin emphasized “the destructive role of Western countries that supply the Kiev regime with weapons and military hardware, as well as provide it with military data and targeting information,” according to a statement on the Kremlin’s website.

Putin stated once more that Russia is “open to serious dialogue” with Ukraine on the condition that Kiev recognize “new territorial realities.” Russia has previously stated that Ukraine’s demand that Moscow hand over newly incorporated territories is unworkable.

Shortly after the 2014 Kiev coup, Crimea voted to leave Ukraine and join Russia. After holding referendums on the issue in September, the Donetsk and Lugansk People’s Republics, as well as the Kherson and Zaporozhye regions, did the same.

According to a statement from Erdogan’s office’s press service, “the calls for peace and negotiations should be supported by a unilateral declaration of ceasefire and a vision of a just solution” to the conflict.

Erdogan, according to Turkish news agency Anadolu, stated after the call that Ankara is willing to assist Russia in exporting grain to poorer countries. “In Turkish companies, we are ready to process the grain into flour and ship it to underdeveloped African countries,” he said. Russia, a major grain producer, has stated that Western sanctions limit its ability to ship food to poorer African and Asian countries.

The leaders also talked about energy cooperation. According to the Kremlin, Putin and Erdogan agreed that building a regional gas hub and the Akkuyu Nuclear Power Plant in Turkey are “priorities.” Rosatom, Russia’s state nuclear power agency, is building the plant.