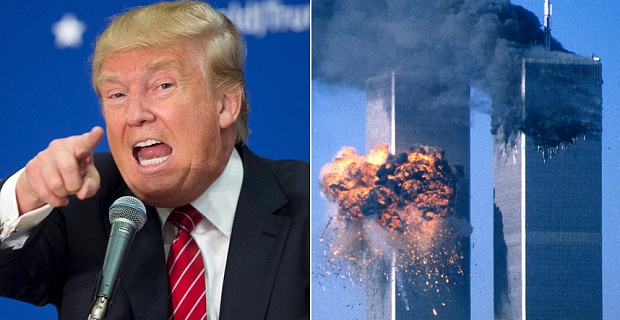 “It’s sort of nice to know who your friends are and perhaps who your enemies are.”

“I think I know what it’s going to say,” Trump declared on Fox News’s “Fox & Friends.”

“It’s going to be very profound, having to do with Saudi Arabia and Saudi Arabia’s role on the World Trade Center and the attack.” Trump added.

“That’s very serious stuff. It’s sort of nice to know who your friends are and perhaps who your enemies are. You’re going to see some very revealing things released in those papers.” the billionaire candidate urged.

“I think they should have been released a long time,” Trump continued.

“I think they’re finally going to be released in some form. I look forward to reading them.”

The 28 pages stem from a congressional report into the attacks, which are thought to implicate the Saudi royal family. The pages were extracted from the report in 2002 and made secret by the Bush government on “national security” grounds.

Senator Rand Paul has been supporting an ongoing effort to release the government documents, having introduced legislation earlier this year called the “Transparency for the Families of 9/11 Act,” that would force the Obama administration to disclose the pages.

“We owe it to these families, and we cannot let this lack of transparency erode trust and make us feel less secure.” Paul has stated.

Other lawmakers, including Rep. Walter Jones and Sen. Ron Wyden signed on to Paul’s bill as cosponsors. The two have been campaigning for a number of years to have the 9/11 information uncovered.

Former Sen. Bob Graham (D-Fla.), who oversaw the Congressional inquiry, and is adamant that there is a Saudi related cover up, has said “The 28 pages are very important and will, I think, inform the American people and, in so doing, will cause the American government to reconsider the nature of our relationship with Saudi Arabia,”

“But beyond that, these are emblematic of a pattern of withholding information unnecessarily and to the detriment of the American people.” Graham has noted.

In a separate interview aired Tuesday, president Obama commented on the unreleased pages, stating “I have a sense of what’s in there, but this has been a process which we generally reveal through the intelligence community.”

“Jim Clapper, our director of National Intelligence, has been going through to make sure that whatever it is that is released is not going to compromise some major national security interest of the United States. My understanding is that he’s about to complete that process.” Obama added.

The President also said he is against legislation allowing victims of the 9/11 attacks to sue Saudi Arabia’s government, reasoning that it would harm relations with the Kingdom and potentially expose the US to endless lawsuits.

“This is a matter of how … the United States approaches our interactions with other countries,” Obama told host Charlie Rose on “CBS This Morning.”

Steve Watson is a London based writer and editor for Alex Jones’Infowars.com, and Prisonplanet.com.