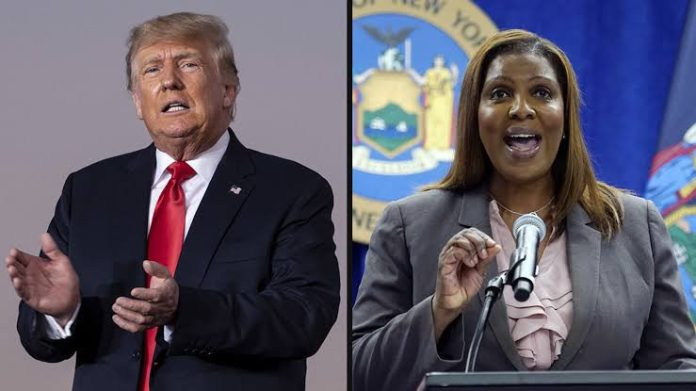 Billionaire businessman and former US president, Donald Trump has sued New York Attorney General Letitia James, accusing her of conducting a “war of intimidation and harassment” against him.

The lawsuit by Trump comes after James filed against Trump and three of his children last September, accusing them commiting fraud using the Trump business empire over a decade.

Trump, a Republican, has repeatedly denied any wrongdoing and accused James, a Democrat of abusing her position for political gain.

In the latest lawsuit which was filed to the Florida State Circuit Court on Thursday November 3, Trump accused James of “a relentless, pernicious, public and unapologetic crusade” against him and the Trump Organization.

He also alleges that the attorney general’s case against him is a “plot” to obtain control of his business that began as a “cartoonish, thinly-veiled effort to publicly malign.”

On his Truth Social account, Trump added that, if he were “not leading in the polls by substantial margins against both Democrats and Republicans, this would not be happening”.

Replying to the lawsuit, a spokesman for Ms James’s office said in a statement that “no number of lawsuits will deter” New York’s case against Mr Trump.

“We sued Donald Trump because he committed extensive financial fraud,” the statement said.

“That fact hasn’t changed, and neither will our resolve to ensure that no mater how powerful or political one might be, no one is above the law.”

Trump’s lawsuit is the latest twist in a long-running feud between Trump and James, who on the night she was elected in 2018 vowed to shine “a bright light” on his real estate dealings.

Trump has accused her of conducting a “witch hunt” and branded Ms James – the first black woman to be New York’s attorney general – a “racist”.