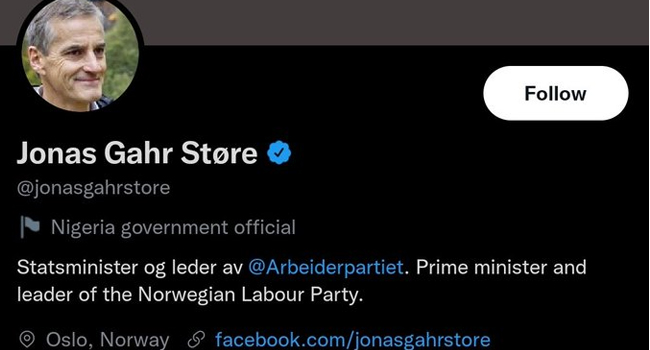 The Scandinavian country’s top diplomats on Tuesday asked Twitter to stop presenting its most senior politicians and institutions as being from the African country.

On Tuesday, the certified Twitter accounts of Norwegian Prime Minister Jonas Gahr Store, Foreign Minister Anniken Huitfeldt, and her ministry were all presented as Nigerian government officials or institutions.

“Dear @TwitterSupport, as much as we enjoy our excellent bilateral relations and close alphabetical vicinity with Nigeria, we would much appreciate if you could label us as Norway,” the foreign ministry wrote in a tweet, followed by a winking emoji.

The confusion has prompted chuckles among the social network’s users.

“So it’s actually been Norwegians all along that keep sending everyone those letters about a dead prince and advance fees,” wrote one person in reference to fraudulent “Nigeria letters”.

More than three hours after the Norwegian foreign ministry’s request, the mistake had still not been rectified