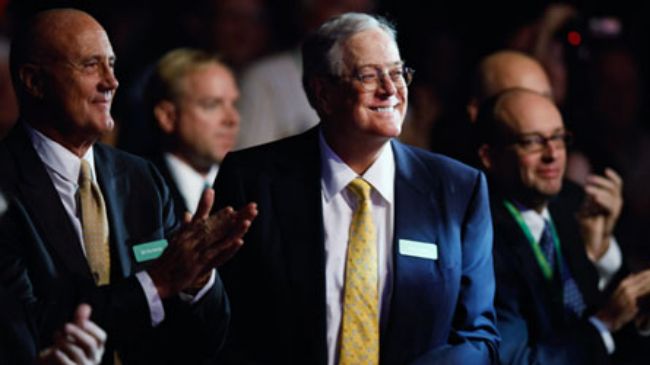 Charles and David Koch should not be blamed for having more wealth than the bottom 40 percent of Americans put together. Nor should they be condemned for their petrochemical empire. As far as I know, they’ve played by the rules and obeyed the laws.

They’re also entitled to their own right-wing political views. It’s a free country.
But in using their vast wealth to change those rules and laws in order to fit their political views, the Koch brothers are undermining our democracy. That’s a betrayal of the most precious thing Americans share.

The Kochs exemplify a new reality that strikes at the heart of America. The vast wealth that has accumulated at the top of the American economy is not itself the problem. The problem is that political power tends to rise to where the money is. And this combination of great wealth with political power leads to greater and greater accumulations and concentrations of both — tilting the playing field in favor of the Kochs and their ilk, and against the rest of us.

America is not yet an oligarchy, but that’s where the Koch’s and a few other billionaires are taking us.

American democracy used to depend on political parties that more or less represented most of us. Political scientists of the 1950s and 1960s marveled at American “pluralism,” by which they meant the capacities of parties and other membership groups to reflect the preferences of the vast majority of citizens.

Then around a quarter century ago, as income and wealth began concentrating at the top, the Republican and Democratic Parties started to morph into mechanisms for extracting money, mostly from wealthy people.

Finally, after the Supreme Court’s “Citizen’s United” decision in 2010, billionaires began creating their own political mechanisms, separate from the political parties. They started providing big money directly to political candidates of their choice, and creating their own media campaigns to sway public opinion toward their own views.

So far in the 2014 election cycle, “Americans for Prosperity,” the Koch brother’s political front group, has aired more than 17,000 broadcast TV commercials, compared with only 2,100 aired by Republican Party groups.