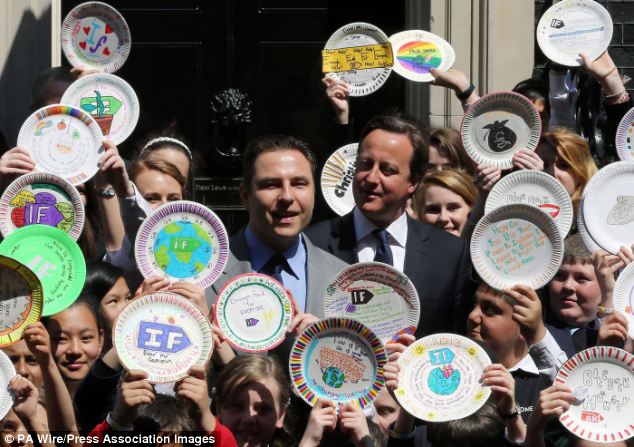 An ‘independent’ celebrity-backed campaign to increase foreign aid was secretly engineered by Whitehall, it was claimed yesterday.

The IF movement recruited David Beckham, Orlando Bloom and Mo Farah to ensure the Government made good on a pledge to spend 0.7 per cent of national income on overseas help.

But internal documents reveal plans were cooked up by ministers and advisers at Whitehall and the Tory party conference two years ago. At one of the first summits, an aide of David Cameron met representatives of five charities which between them receive more than £60million a year from the taxpayer via the Department for International Development.

Andrew Mitchell, the International Development Secretary at the time, then held a series of other meetings to orchestrate the rest of the campaign.

Details were obtained through a Freedom of Information request by War on Want.

Charity chief John Hilary said the Government wanted to use IF to ‘promote the Prime Minister as a leader on the global stage’.

War on Want claimed it did not join the campaign after being told it could only do so if it refused to criticise government policy.

‘The effects of their politics both here and overseas are very regressive, so the idea that we would have to be silent on that, and that the campaign could not target those policies, was deeply disturbing,’ added Mr Hilary.

The charities that comprise the IF campaign – Oxfam, Save the Children, ActionAid, Catholic aid agency Cafod, and Christian Aid – insist they would never compromise their independence. IF said there was no ‘conspiracy’, while a spokesman for DfID added: ‘We award funding based solely on ability to deliver specific and measurable results.’

However, the revelations have caused Tory backbenchers to renew their efforts to scrap the 0.7 per cent target – which comes at a time when other Whitehall department budgets are being cut.

Douglas Carswell, MP for Clacton, said: ‘This is more evidence that big corporate aid organisations collude with big government to spend our money.

They don’t always spend it in the interests of the poorest people in the world that they claim to be representing.’

The internal memos reveal how the foreign aid charities first wrote to Mr Cameron detailing their plans for the IF campaign in February 2011.

By September that year, it was agreed to use the London Olympics to push the aid agenda – and a ‘hunger summit’ at Downing Street last August allowed Mr Cameron to be pictured with athlete Mo Farah two days after his second gold medal win.

IF was launched at the start of the year. The name was chosen as a label and the initials do not stand for anything.

Earlier this month, Mr Cameron was pictured with comedian David Walliams and 100 children backing the campaign.