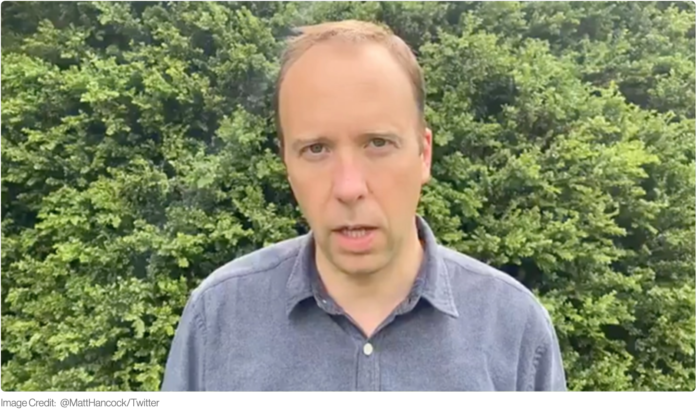 The United Kingdom’s Health Minister Matt Hancock resigned on Saturday following massive criticism for breaking his own COVID-19 measures during a secret tryst with his aide.

Hancock made the announcement in a social media video message, apologizing for flouting his own rules while the rest of the country made “enormous sacrifices.”

“I understand the enormous sacrifices that everybody in this country has made, that you have made, and those of us who make these rules have got to stick by them and that’s why I have got to resign,” Hancock said.

Hancock reiterated his apology for “breaking the guidance” and he apologized to his family and loved ones for “putting them through this.”

UK Prime Minister Boris Johnson, however, praised Hancock for his “considerable contribution to Government” and told him to “leave office very proud of what you have achieved.”

“I am grateful for your support and believe that your contribution to public service is far from over,” he added.

The controversy began on Friday after The Sun published photos from May 6 of a married Hancock kissing his aide Gina Coladangelo during a time when restrictions were in place preventing people from meeting indoors and even shaking hands with each other.

UK television personality Piers Morgan blasted Hancock for deciding to resign over his hypocritical affair rather than for his “abject failures” regarding the country’s strict COVID-19 measures.

“Didn’t resign for his abject failures on PPE, testing & care homes that led to Britain having the worst covid death toll in Europe. Did resign for being caught snogging his mistress,” Morgan tweeted.