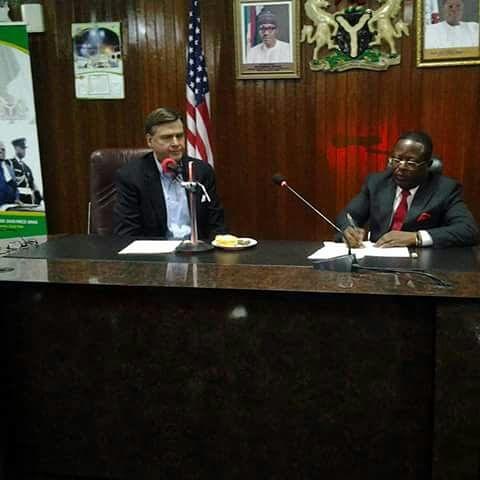 What was the strategic consideration behind the choice of the city of Abakaliki for the visit by the United States Ambassador to Nigeria, Mr Stuart Symington?

These and other critical questions were what were agitating the minds of most residents of Ebonyi state when Symington made his first maiden official visit to the state on Friday, 17th March, 2017, alongside the US Consular General in Nigeria and other senior diplomats from the American Embassy.The concern is justified, especially now that the new administration of President Donald Trump in Washington DC, is yet to clearly define the focus of its relationship with Africa, Nigeria inclusive. Much is being made of this visit and the chance it holds out to place the state on the map of global relevance.

One thing is certain though, Mr Symington was not here as a summer tourist. It was an exploratory visit. One from which he would take some thought-provoking message back home. For a young state like ours, an interaction with the world’s sole super-power holds enormous diplomatic, economic and related political miracles for us. The state’s economy needs a good dose of foreign capital and the American businessmen have it aplenty. The visit of the US pointman in Nigeria, to Ebonyi state has crowned the tireless efforts of the state governor who has circled  the globe sampling the investment credentials of the state and shopping around for credible investors and creditors. History has therefore penned down his name for being the first governor of Ebonyi state to host the united States number one diplomat in the country, a feat only a smart leader can pull.

Mr Symington is indeed a fine gentleman who has a broad background in US policy, with experience supporting peacekeeping missions and democratic transitions, which he has deployed within and outside American shores. He has represented US in Honduras, Spain, Mexico, Iraq, Syria and held several important positions in Washington. His experience in international diplomacy is enormous, coupled with his vast piercing influence and connections across the world. A man of his kind therefore has all it takes in rescuing our dear state from its developmental struggles. He understands the beauty of simplicity and human relations. I particularly took due note of this after he violated protocols and precedence, defied security concerns to shake hands with those of us in his convoy, including drivers, policemen, photographers, and even passers-by.

In general, the state visit promises sundry mutual benefits. It was itself a psychological prop for our young state. It provided an opportunity for the top diplomat to identify with the hopes and ambitions of Ebonyians. Mr Symington, after being conducted round some project sites in the state, was generally positive in his assessment of the modest achievements made by the governor in the area of agriculture, health, infrastructure and human development. These giant strides drew applause from the US diplomat who managed to provide moral inspiration and political motivation without at all sounding condescending.

It was one of those truly august occasion whose import and significance must not be squandered or naively under-rated. For Governor Umahi, the Ambassador’s visit was a window that must be expanded into a doorway en route to the new world and it’s boundless opportunities. His determination to ensure that the opportunity presented by the visit was exploited to the fullest was glaring as he carefully articulated and presented fertile sectors for possible US involvement. He wanted the American government to widen its intervention to include assistance in exploring potentially lucrative investment opportunities in the state.

The governor who acknowledged the long-standing relationship between Nigeria and America expressed belief that the visit of the Ambassador to the state would further bring investment partnerships as Ebonyi state depends largely on the encouragement from the US government to surmount challenges of under development, insecurity and poverty. Of particular significance is his appeal to the Ambassador to expand its intervention programme in the state and assist Ebonyi state in her efforts to develop the mineral and agriculture sectors. He called for exploration of the salt deposit in Ohaozara and the popularization of the Abakaliki rice.

Ebonyi needs support of advanced countries like United States of America to concretize it’s vision of becoming the salt capital of the world and the food basket of the nation. Also available in reasonable quantity in the state is a goldmine of lead, zinc, limestone and other natural endowments. Ebonyi needs the endorsement of a powerful ally like the US to shake off her lethargy and get her bearing right. Whatever Nigeria’s damned image, she occupies a strategic locus on the African continent, which makes it difficult to ignore the country. The US knows just as well that a stable and progressive Nigeria is a valuable ally. The mathematics is that Ebonyi is critical to Nigeria and Nigeria is critical to America. Case closed!

The rousing reception accorded to the august visitor shows that the Ambassador has come to meet his friends and distant but enthusiastic supporters. During the visit, the two leaders covered a broad range of issues including, economic reform and economic policy, how to spur investment and how to strengthen Ebonyi’s nascent democracy through direct assistance from the US. This official trip is a very crucial opportunity whose dividends touches every sector of the state. Mr Symington’s presence was the real fresh breath of air in an era characterised by cut-throat  investors and charlatans.

The point needs reiteration that despite the sometimes general bleak forecasts about Ebonyi state and its people, the state actually stands a chance to become an investment power house. The visit is a clear signal that the state under Chief Umahi would enjoy international relevance. The colour of our economic sun has turned golden. The light shines bright at the end of the tunnel.

Whatever any critic must say about the Governor, credit must be given to him for the repair of our battered image. He has laboured ostensibly to recast the hitherto negative image of an Abakaliki man as a national outcast. Through the governor’s undaunted efforts, Ebonyi state has earned for itself a quantum of international respect, so much that within a short time, the state would be mentioned across the continent because of his numerous exploits. All the state needs to spring forth is massive infusion of private investment.