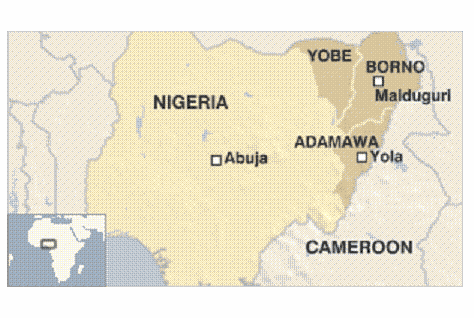 The Obama administration has deployed 80 military personnel to Chad to help locate the nearly 300 schoolgirls kidnapped in Nigeria by Islamist militants Boko Haram.

Pentagon spokesman Lt. Col. Myles Caggins said the team will mostly be made up of Air Force personnel responsible for operating unmanned, unarmed drones. The drones will be flying out of an airstrip in Chad — which shares a portion of its western border with northeastern Nigeria — with a mission to search for the girls in Nigeria.

Other U.S. servicemembers will be assigned to act as an armed security force tasked with protecting the team. The team was scheduled to arrive Wednesday.

Obama formalized the decision with a letter to House Speaker John Boehner and the Senate notifying lawmakers about the steps underway to assist in the return of the abducted girls.

Obama said the servicemembers will help with intelligence, surveillance and reconnaissance aircraft for missions over northern Nigeria.

He said the force will stay in Chad until its support is no longer necessary.

The girls were kidnapped last month by an Islamic extremist group known as Boko Haram. As the U.S. escalated its involvement in the search effort, new violence erupted in Nigeria at the hands of Boko Haram.

Officials in at least three other central and central-north states have suggested the extremists are feeding into tribal and religious tensions to spread the insurgency from their stronghold in Nigeria’s northeast into an area where thousands have been killed in recent years in disputes over land, water, religion and tribe.

The new U.S. ground team suggests that the U.S. wants to now fly Predator drones rather than the Global Hawks they’ve reportedly been using up to this point.
Global Hawks have a longer range, but Predator drones would need a support team close by to fly them.