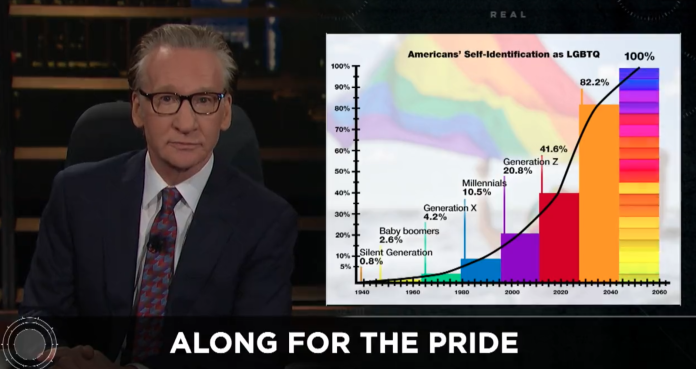 Bill Maher explained that “The LGBT population of America seems to be roughly doubling every generation.” He said that the reason is it is trendy. Netizens did not find it funny and slammed him for his ‘homophobic’ remarks

Bill Maher, the American comedian, touched upon the rise of LGBTQ on his show ‘Real Time with Bill Maher’ on HBO. He said that the number of kids identifying as trans has increased over the years and going by the numbers, “we will all be gay in 2054.” He joked that earlier people used to ask their children what they wanted to be when they grow up. He said that they meant what profession, however now, the answer is different. Mentioning a Gallup survey, Bill Maher added, “It’s okay to ask questions about something that’s very new and involves children the answer can’t always be that anyone from a marginalized community is automatically right trump card might drop end of discussion because we’re literally experimenting on children.”

If this spike in trans children is all biological, why is it regional? Either Ohio is shaming them or California is creating them. pic.twitter.com/t3Tx23MOsu

Maher explained via the survey that “The LGBT population of America seems to be roughly doubling every generation. Less than one percent of Americans born before 1946 (that’s Joe Biden’s generation) identify that way, 2.6 percent of boomers do, 4.2 of Gen X, 10.5 of millennials and 20.8 percent of Gen z, which means if we follow this trajectory, we will all be gay in 2054”

The comments did not go down well with the netizens who called it ‘homophobic’ and ‘unacceptable’. bashing Maher, a Twitter user said, “just said California is “creating more trans people” and that we should question why “so many more people are coming out as gay.” The reason more people didn’t come out before is because homophobic people — like Bill Maher — made them feel ashamed. Disgusting guy.”