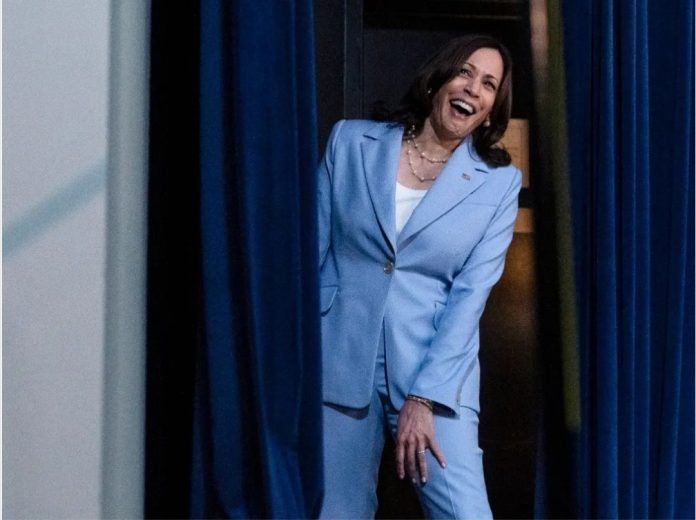 The Vice President of the United States, Kamala Harris shared her full name, the color of her dress, her pronouns and her gender identity during a White House meeting with disability advocates on Tuesday.

This occured on the 32nd anniversary of the date when President George H.W. Bush signed the Americans with Disabilities Act into law.

At the start of the event, the vice president stated that she uses she/her pronouns, and described herself as a “woman wearing a blue suit” others in attendance used this same format for their introduction.

Harris’s decision to announce her pronouns follows the wake of the gender ideology which involves the idea that biological men can identify as women, and vice versa.

As reported by theblaze, Her comments generated significant reactions  on social media some of which include:

“One of the many aspects that makes this so stupid is that Kamala is describing her clothing in order to help the visually impaired, and yet she’s pointlessly wearing a mask which needlessly alienates the hearing impaired,” tweeted conservative commentator Matt Walsh of the Daily Wire.

GOP Sen. Ted Cruz of Texas commented on the vice president’s remarks by tweeting, “But what is a woman?”

How does she know though….about the woman thing…. or the blue thing for that matter,” Harmeet Dhillon tweeted.

“If she would repudiate woke inanities and move towards a commonsensical centrism, she would be embraced by a majority of Americans. Instead, she just digs in,” Christina Sommers tweeted.

And they wonder why ordinary Americans think these people have lost their grip,” Dan McLaughlin of National Review Online tweeted.

“You know this was a meeting with disability advocates, right? Common courtesy might not be something the RNC understands, but most Americans think we should have more of it. Go on ridiculing people for being nice though,” Democratic Sen. Tammy Duckworth of Illinois tweeted, referring to the Republican National Committee.