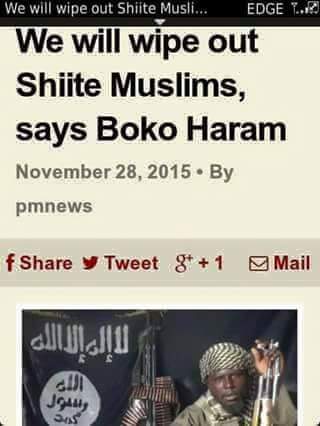 In one of its few important and last notable announcements, after the November 27th bombing of a Shia procession in Kaduna, the Boko Haram terrorist group as quoted in the media, said, “we will wipe out Shiite Muslims.”

Here is the full announcement which is raising flags anew due to related headline events apparently targeted at the same minority Muslim group in Nigeria:

Boko Haram on Saturday claimed responsibility for a suicide bombing on a Shiite Muslim procession near the northern Nigerian city of Kano that killed 22 people.

The hardline Islamist group said in a statement in Arabic on social media its bomber “detonated his explosives which led to the death” of the victims on Friday.

“And by the permission of Allah these attacks of ours against Shi’a polytheists will continue ‎until we cleanse the earth of their filth,” it warned.

At least 21 people were initially reported killed but the toll rose after one more person was confirmed dead.

“For now, we have 22 deaths following the death of one more person yesterday. Thirty-eight people have also been injured, two of whom have been discharged from the hospital,” one of the organisers of the march Ali Kakaki told AFP Saturday.

He said that, despite the attack on Friday, the Islamic Movement of Nigeria members had continued their march from Kano to Zaria in neighbouring Kaduna state, where their leader Sheikh Ibrahim Zakzaky is based.

The march is to mark Ashura, which commemorates the death of Hussein, the grandson of the Prophet Mohammed.

“Following the attack, many more of our members have joined the procession,” Kakaki said, adding that they aimed to arrive at their destination next week.

Friday’s attack took place in the village of Dakasoye, some 20 kilometres (13 miles) south of the city of Kano.

One of the procession’s organisers said a bomber clad in black ran into the crowd and detonated his explosives. Source: pmnews 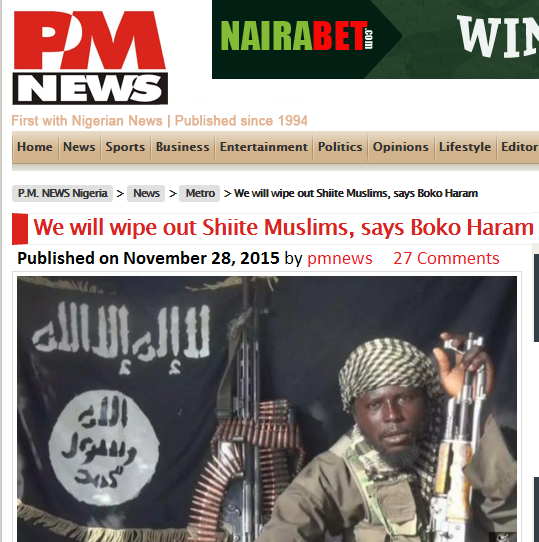